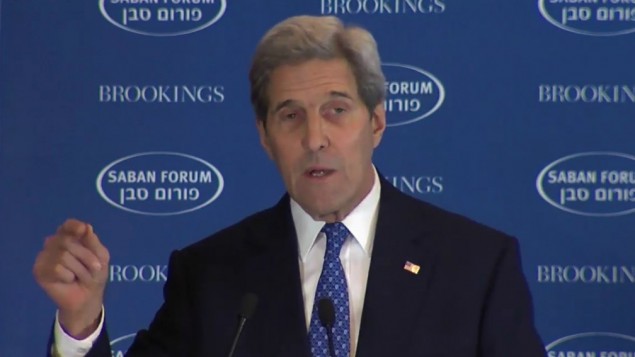 According to a newly revealed recording, former US Secretary of State John Kerry blames Israel for stalled peace talks with the Palestinians, saying that the majority of the Israeli cabinet opposed the establishment of a Palestinian state.

Israel’s Channel 10 on Tuesday published a recording, purportedly made at a conference in Dubai during this past year, in which Kerry can be heard praising the Palestinian Authority for its commitment to nonviolence amid the wave of Palestinian stabbing, shooting and car-ramming terror attacks beginning in the fall of 2015.

“The Palestinians have done an extraordinary job of remaining committed to nonviolence,” Kerry says. “And in fact, when the [knife] intifada took place they delivered nonviolence in the West Bank.”

“This is overlooked by the general [Israeli] population because it is not a topic of discussion,” he added. “Why? Because the majority of the cabinet currently in the current Israeli government has publicly declared they are not ever for a Palestinian state.”

The former secretary of state has been in the news in recent days over his defense of the Iran nuclear deal, which he helped negotiate in 2015. Kerry warned Congress that it would be “extraordinarily dangerous” if it rejected the agreement.

Kerry said in a presentation to the Chatham House think tank that President Donald Trump’s refusal to recertify the Iran deal in October “was clearly made without relevance to any fact whatsoever,” and that Congress should not be involved in the matter.

“What President Trump regrettably has done by his invective against the deal, he’s polluted the pool in a way that whatever Congress does is going to be interpreted as their effort to kill the deal through the back door,” Kerry said.