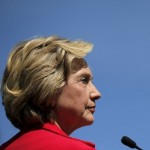 Democratic presidential frontrunner Hillary Clinton is focusing on comments by Rep. Kevin McCarthy (R-CA) linking the 2012 Benghazi attacks to her political career in her first campaign ad to air on national cable TV.

The ad, set to begin airing on CNN and MSNBC, centers on McCarthy’s controversial remarks last week suggesting that the House Select Committee on Benghazi was used for Republican political gain and to discredit Clinton in the 2016 race.

“The Republicans finally admit it,” a narrator announces before cutting to the House Majority Leader’s remarks.

McCarthy, who is angling to succeed House Speaker John Boehner, has said his comments shouldn’t be interpreted to mean the investigation had a partisan motive. The ad comes before Clinton is scheduled to testify before the committee on Oct. 22. Read more at The Washington Post.