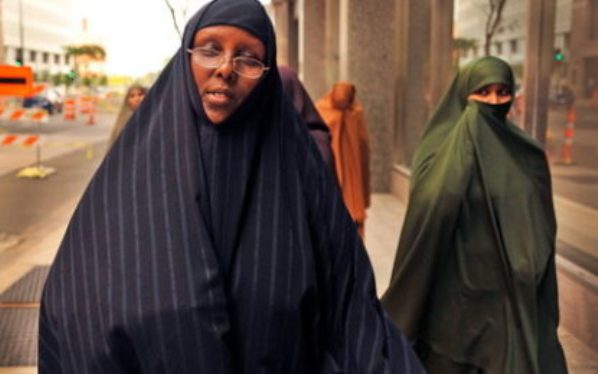 Two Somali women living in the United States who collected money for a terrorist group will go to prison for more than a decade.

Hinda Dhirane, 47, and Muna Jama, 40, were involved in an international online network of women that sent small amounts of money to the Al Qaida affiliate al-Shabab in Somalia. Jama was sentenced Friday to 12 years in prison, Dhirane to 11.

Female supporters of terrorism are rare. According to George Washington University’s Program on Extremism, 89 percent of Americans accused of ties to the Islamic State are men. But arrests of women are on the rise, according to a report from the school. Older defendants are also unusual in these cases: The average accused Islamic State supporter is 27.

“They were and presumably continue to be ardent supporters of al-Shabab,” Judge Anthony J. Trenga said Friday in federal court in Alexandria. “They undermined our national security efforts in ways that go way beyond the amounts of money sent.”

Those amounts were small. Altogether, only $4,750 went abroad. There was no evidence that Dhirane and Jama planned or supported any specific act of violence. But prosecutors argued that the pro-terror propaganda they helped disseminate online could encourage such violence and that the money they sent was valuable in funding safe houses and military operations.

“What is glaringly absent is any expression of remorse,” prosecutor James P. Gillis said in court Friday. “These defendants knew exactly what the money was going to be used for.”

The two women were convicted in a bench trial last year after arguing, unsuccessfully, that they sent money only for medical care in Somalia. A co-conspirator, Amina Esse, testified that they and others in an international “Group of Fifteen” spoke in code to avoid detection.

They also lied to some women, claiming the money was being used to feed orphans or build schools. Jama threatened one woman who wanted to quit after learning her money was going to al-Shabab. The two celebrated deadly terror attacks, prosecutors said, laughing about “very heavy rain” in Somalia.

Jama was the organizer of a private online “Group of Fifteen” chat room that included women from Somalia, Kenya, Egypt, the Netherlands, Sweden, the United Kingdom and Canada.

Defense attorneys argued that while the women may have engaged in violent talk, they were hardened by their youthful escape from civil war in Somalia and desperate for their homeland’s salvation.

“Ms. Jama was 10 years old when the civil war broke out,” defense attorney Whitney Minter said in court. “She saw people who were murdered in front of her. She lived in daily fear of rape and murder. She watched women and children die in front of her from malnutrition and childbirth.”

In Mogadishu, the country’s capital, Dhirane hid under dead bodies to avoid bombardments, her lawyer said in court papers. Separated from her family, she fled to Ethiopia. In her refugee camp, Ethiopians beat the refugees and stole their rations.

Both women made it to the United States in the 1990s and eventually became citizens. Dhirane has six children in Kent, Washington. Jama has seven and lives in Reston, Virginia.

They saw al-Shabab as a force against internal corruption and external Ethiopian attacks, the lawyers argued.

While people living in Somalia may have soured on al-Shabab as the group’s violence and ambitions grew, they said, people in the diaspora could get a distorted view.

“[Jama] is of a generation and a population that was primed to see al-Shabab as liberators of the Somali people,” Minter wrote in a court filing. “She learned of the horrors on the ground through the Somali social networks, which spread news primarily through oral and social means; the same horrors that she observed as a child while fleeing the civil war and while in refugee camps.”

Gillis responded that it was “insulting” to other Somali refugees to suggest that the women’s history and political culture led them to support a terrorist group.

“Loyal, hard-working, decent Somalis are living in this country who suffered the same horrors . . . and came to love this country and become productive members of its society,” he said.