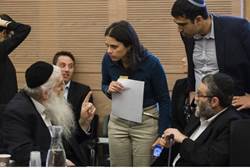 Shaked’s move comes ahead of the scheduled appointment of four Supreme Court justices by the Judicial Selection Committee in coming weeks, appointments that will determine the character of the Supreme Court in the coming years.

The Judicial Selection Committee comprises four politicians, three Supreme Court justices, including Naor, and two members of the Israel Bar Association. To appoint a judge, a majority of seven out of the nine members of the committee is necessary. Given the number of judges on the committee, the court’s own representatives have a de facto veto in the voting system.

According to the proposed legislation submitted by MK Robert Ilatov (Yisrael Beytenu), a majority of five would suffice to approve an appointment, effectively circumventing the Supreme Court justices’ veto.

Members of the ruling Likud party and other nationalist factions have been highly critical of the court in the past over allegations that it has encroached on the legislature’s domain by issuing rulings on non-judicial, political issues. JNS.ORG