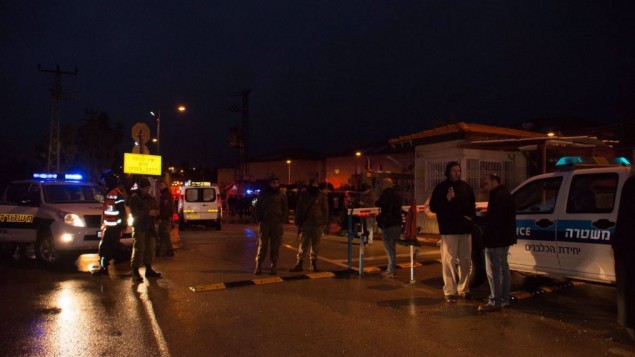 Hundreds gathered in Yerushalayim today to attend the funeral of the latest victim killed in a Palestinian stabbing attack.

Shlomit Krigman, 23, was buried at the Har Hamenuchos Cemetery in Givat Shaul, after succumbing to stabbing wounds from Monday afternoon’s attack in Beit Choron, a settlement northeast of the capital in the West Bank.

Krigman was attacked, along with another woman, 58, at the local grocery store by two Palestinian terrorists who infiltrated the community. The assailants were shot and killed by a security guard, before managing to detonate pipe bombs they had brought with them to the scene.

According to the Hebrew news site nrg, in a tragic twist of fate, the plot that Krigman’s family found for her is located next to that of Dafna Meir, the mother-of-six from Otniel who was stabbed to death by a Palestinian terrorist last week in front of her daughter at the family home.

Krigman, who did her national service as a coordinator for the Bnei Akiva youth movement, was mourned by those who knew and loved her, as well as by strangers, according to the Israeli site 0404.

One such person told 0404 why he had attended the funeral, despite the stormy weather in Jerusalem.

“I felt the need to come, because Shlomit is one of us,” he said. “Yesterday this happened to her; tomorrow, it can happen to any one of us. We have to come together and defeat terrorism.”