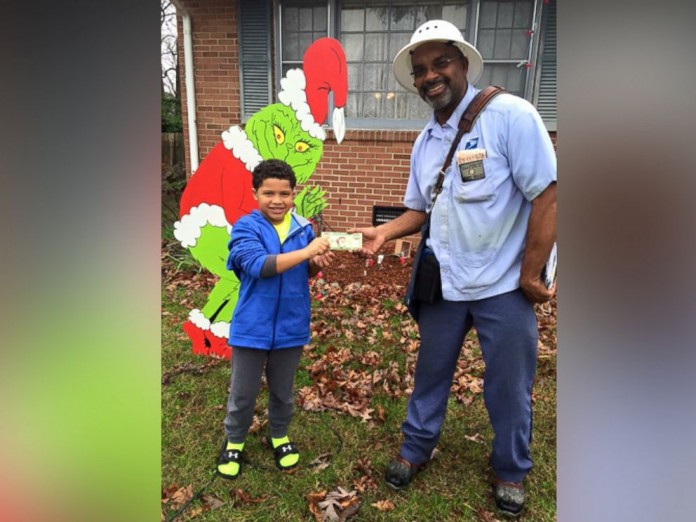 Last week, an 8-year-old boy from Newport News, Va., was worried about his letter carrier out in the excessive heat. So the boy filled a cooler with water and Gatorade and left it outside his front door with a note wishing the letter carrier a good day.

The mailman’s gratitude was caught on the family’s security camera as he praised God for the cold beverages. The boy, Carmine McDaniel, told a local TV station, which covered the sweet story, that he didn’t want the letter carrier to pass out while doing such important work.

News of McDaniel’s good deed reached the White House, and President Barack Obama on Facebook on Thursday asked the country to follow Carmine’s lead over this weekend’s record heat wave.

“Even the simple act of playing outside, walking the dog, or delivering the mail can be dangerous,” Obama wrote. “So take a page out of Carmine’s book, and find simple ways to protect yourself, your family, and your neighbors.”

In parts of the country temperatures could surpass 100 degrees, and the heat isn’t supposed to let up for days. Obama urged people to stay indoors in the air conditioning, drink a lot of water and be on the lookout for children or animals kept alone in a car. He asked that people check on each other to make sure they are managing the heat.

“This summer, small acts of kindness like Carmine’s can make a big difference,” Obama wrote.

Carmine’s mother, Terra McDaniel, said her son and letter carrier Henry Bailey have developed a special bond. Carmine has given water to Bailey before but decided on his own that he wanted to leave out a whole cooler of drinks for Bailey, who has been delivering mail in the neighborhood for 21 years, McDaniel told ABC News.

“It shows the innocence of a child because he thinks it’s what he’s supposed to do,” she said. “He doesn’t see it as a big deal. When other people say something nice, it makes you think, ‘Wow, maybe I am doing a good job as a parent.’ ”

When McDaniel saw that the president mentioned her son on his official Facebook page, she wrote on hers, “I am completely speechless and brought to tears.”