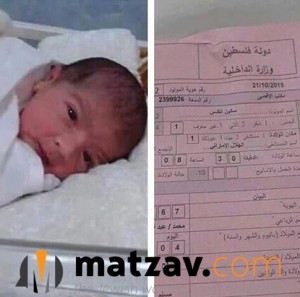 As Palestinian terrorists continue their weeks-long stabbing spree of innocent Israeli Jews, a Gaza couple has become so encouraged with the ongoing jihad that they decided to name their newborn baby “Knife of Jerusalem.”

Their announcement was first made over the weekend on the Facebook page of Fatah, a Palestinian political party that rules the West Bank and is chaired by Palestinian President Mahmoud Abbas.

“A [Palestinian] civilian from Rafah in the southern Gaza Strip named his child ‘Knife of Jerusalem,’ read the Facebook post.

Gaza resident Mohammed Abu Shebika touted the naming event as a celebratory occasion and invited Palestinian journalists to take part in the festivities. Shebika proudly showed the baby’s birth certificate to the Gaza media, proving he actually went through with naming his child Knife of Jerusalem.

In a video translated by the Middle East Media Research Institute (MEMRI), Shebika says, “Allah has given me a new baby, and I’ve named him ‘Knife of Jerusalem’ after the intifada of the knives.”

And this new jihad against the Jews of Israel is “a new kind of revolution,” Shebika commented. “Allah willing, the third intifada will not stop.”

“After this intifada, and in support of the blood of the martyrs, I’ve named him ‘Knife of Jerusalem,’ because the least we can do is to show solidarity with our people in the West Bank and Jerusalem. Giving him this name was the least I could do, even if many people don’t like it,” the new father added.

A women dressed head-to-toe in an Islamic covering, with the garment only allowing for her eyes to show, added, “I am the mother of Knife of Jerusalem.”

“We gave him this name in solidarity with our people in the West Bank. This is the least we could do for them, in the third intifada, the intifada of Al-Aqsa,” she concluded.

“I am a friend of Knife of Jerusalem’s father,” another man told the Palestinian media outlet. “It was my idea, and I published the post on Facebook,” he said of the social media outlet that is owned by a Jewish man and has offices in Israel. “I felt that this would gain lots of attention on the social media,” the friend of the father added.

The friend explained that they were encouraged by a “Lovers of Stabbing” music video on Palestinian television, which convinced them to name the baby Knife of Jerusalem. “This is a really sweet name,” the friend of the father suggested.