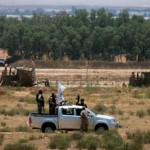 “Everything was ready; the invitation and flying tickets, but getting a permission to go and get a U.S. visa on our passport from Jerusalem or from Cairo was impossible,” Jehad Saftawi said, adding that “the Gaza Strip is really a big prison that its borders are very well guarded by both the Israeli and the Egyptian army.”

Saftawi, 25, and his wife Lara have to give up a training program in the United States because of the permanent closure of Gaza Strip borders, either with Israel or with Egypt, and the tight restrictions imposed on populations to travel abroad.

Saftawi, who has never been out of Gaza since he was a kid, works as a photojournalist for a U.S.-based media institution, told Xinhua that in August, he received an invitation from his directors to join a three-week working program at the institution in Washington D.C..

The young man and his wife, who is also a freelance journalist, received the invitation to travel from Gaza to the U.S.. They spared efforts and knocked at the doors of Palestinian officials in the liaison offices to get a permission that enables them to cross from Gaza, but things didn’t work out with them.

Recent feuds between Palestinian President Mahmoud Abbas Fatah Party and Islamic Hamas movement on who will be in charge of operating Rafah crossing point on the borders between Gaza Strip and Egypt, had kept the key crossing point indefinitely closed.

Saftawi on his Facebook page slammed the Israelis and the Egyptians for keeping the key crossings of Gaza closed and turning the borders into a grave yard for anyone who approaches it. He said he is one example of 1.9 million Palestinians living in a place that all parties agreed upon to keep it shut down.

Azzam el-Ahmed, a senior Fatah leader and an aide to Abbas, had announced last week that the Palestinians are holding intensive contacts with the Egyptians and both are working together on operating the crossing permanently, with a new mechanism, to ease life in the Gaza Strip.

However, Gaza leaders of Hamas movement, which has been ruling the coastal enclave since it had violently seized control of it in the summer of 2007, announced that they are opposing any new operation or new mechanism to operate the crossing without having Hamas, a major party, involved.

“So far, the agreement between the Palestinian authority and Egypt on operating Rafah crossing is on the way to be finalized soon,” el-Ahmad said, adding that “as soon as the agreement sees the light, we will certainly notify Hamas and get it involved in operating the crossing.”

But Sami Abu Zuhri, the Islamic movement’s spokesman in Gaza, said in an emailed press statement that Hamas is very much concerned over operating Rafah crossing and ensure a free movement for Gaza Strip’s residents, adding that “we are ready to work and deal with any proposal that relaxes the hard life of our people.”

However, he slammed the Palestinian authority, saying that “there is a clear insistence of some leaders to overcome the reconciliation agreements and reach an agreement that is far from the reality in a way that makes such agreements to operate the crossing very difficult to implement.”

A Palestinian official closed to Ramallah leadership, who spoke on condition of anonymity, told Xinhua that the new arrangements on operating Rafah crossing will be completely different from the old ones.

The Egyptian security concerns and the internal disputes between the Palestinian rivals had kept the populations in the Gaza Strip in the biggest ever prison on earth, said Palestinian observers and analysts, who warned that such an ongoing situation will lead to a big explosion.

“These endless disputes that have been going on between Fatah and Hamas over the past eight years are turning the daily life of the populations into misery and hell,” said Talal Oukal, a Gaza-based think-tank and political analyst, adding that “the two sides should put their differences aside and think about their people interests.”

Rafah crossing point is the only window for 1.9 million Palestinians to travel to the outside world. Since 2013 ouster of former Islamic President Mohamed Morsi and the crackdown on the Egyptian Muslim Brothers, the crossing had remained closed.

Kamel Abu Madi, the Hamas deputy minister of interior in the Gaza Strip, told reporters in Gaza that since the beginning of 2015, Egypt has kept the crossing point of Rafah closed for 400 days, and had only reopened it for 19 days, just temporarily for Muslim pilgrims to pass to Saudi Arabia.

“The number of those who are in need for urgent travel through Rafah crossing and officially registered in the interior ministry has reached 25,000 people, most of them are students who need to continue their education abroad and patients who need urgent medical treatment,” said Abu Madi.