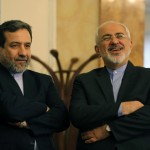 Iranian leaders, including President Hassan Rouhani and Foreign Minister Javad Zarif, have said that the country has “no intention” of abiding by a UN Security Council resolution that encompasses the nuclear deal and other restrictions on Tehran’s rogue activities.

Iran views the recent deal as separate from the resolution endorsing the deal and further prohibiting Iran from developing advanced ballistic missiles and purchasing other types of arms, according to the Middle East Media Research Institute (MEMRI).

On July 20, 2015, Iranian Deputy Foreign Minister and senior negotiator Abbas Araghchi said, “We will not accept an agreement which continues the embargo on weapons and the sanctions on missile development. In the end, the Americans said, ‘We will put the issue of the embargo and the missiles in the UN Security Council Resolution separate from the agreement.'”

Foreign Minister Zarif, in an August 9 interview, reiterated: “Violating the JCPOA has consequences, while violating UNSCR 2231 has no consequences.”