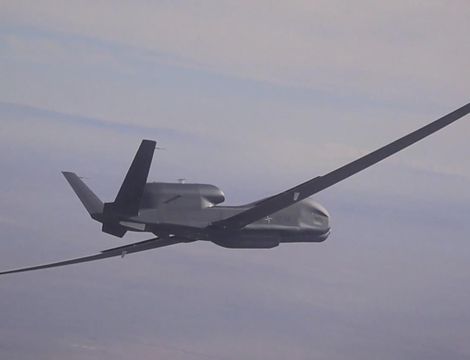 Iran said that the wreckage of an American drone shot down last week was found four miles inside its territorial waters, in one of its most detailed accounts of an incident that brought the two countries to the brink of war.

“After the shooting down of the drone, initial actions were taken and its location was identified,” Brig. Gen. Majid Fakhri, the head of the Iranian Armed Forces’ Geographical Organization, was cited as saying by the semi-official Tasnim news agency. “The drone was definitely in the waters of Iran.”

President Donald Trump abruptly canceled planned airstrikes against Iran for downing the drone which U.S. officials say was flying through international airspace as the Middle East risked a devastating new conflict. But tensions have continued to escalate with the two countries trading threats and insults.

Trump on Tuesday vowed to meet any Iranian strike on the U.S. with overwhelming force, while Iran said the path to a diplomatic solution to the crisis had closed after its supreme leader, Ayatollah Ali Khamenei, and other top officials were sanctioned. It also characterized the White House as suffering from a “mental disorder.”

Tensions have spiked in the Gulf since May, when the Trump administration revoked waivers on the import of Iranian oil, squeezing its economy a year after the U.S. walked away from the landmark 2015 deal meant to prevent the Islamic Republic from developing a nuclear weapon. Since then, a spate of attacks on oil tankers near the Strait of Hormuz, a shipping chokepoint, have convulsed the region and pushed up oil prices. Iran denies involvement in the attacks on shipping.

The new penalties are unlikely to have a significant impact on a country that’s already in recession due to stringent U.S. sanctions on its oil sector and has been largely shut out of the global financial system. The U.S. has sanctioned more than 80% of Iran’s economy, according to Secretary of State Michael Pompeo, who was in Saudi Arabia and the United Arab Emirates this week to rally a front against Iran.

Still, the targeting of Khamenei shocked some Iranians because he’s considered a spiritual guide and a holy man by his most devoted followers.

In his first comments since being sanctioned, Khamenei on Wednesday said the additional pressure by a “cruel enemy” wouldn’t impact his country.

Trump has coupled his “maximum pressure” campaign of sanctions with invitations to sit down with Iranian leaders. In an interview that aired Sunday on NBC’s “Meet the Press,” the president said that he thinks Iranian leaders want to negotiate and he’s willing to talk with no preconditions except that the outcome must be Iran acquiring no nuclear weapons.

The 2015 nuclear deal was designed to thwart any Iranian attempt to develop an atomic bomb, and international inspectors had repeatedly reported Iran complying with the terms of the accord.

European powers are now attempting to convince Iran to continue abiding by the deal after Iranian officials warned the country would breach the deal’s cap on stockpiles of low-grade uranium by June 27.

The U.K. ambassador to Tehran, Rob Macaire, said on Wednesday that extensive work was underway to boost a special mechanism designed to protect European trade with Iran from U.S. sanctions and ease the economic pressure on Iranians.

“The U.K. is seriously concerned about Iran’s plans to reduce compliance under the JCPOA and firmly believes that it will be in no one’s interests,” he said in a statement. “We are committed to diplomacy to resolve differences between nations and to reduce dangerous regional tensions.”

Russia, with deep political and economic ties to Iran, has denounced U.S. efforts to raise pressure on Iran and this week backed Tehran’s account of the downing of the U.S. drone. In comments Wednesday, a top Foreign Ministry official in Moscow said hopes for a diplomatic solution to the crisis were fading after the penalties imposed on Khamenei.

“There is a very narrow window left because this is an absolutely insulting step for intergovernmental relations. But hope dies last,” special envoy Zamir Kabulov told reporters.

“Iran will never be alone if, God forbid, the U.S. ever takes absolutely crazy and irresponsible actions against it,” he said. “Not only Russia, but many countries sympathize with Iran.”