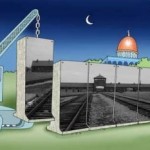 The secretariat of the contest, Shojayee Tabatabayee, told Fars last week that 839 works had been submitted by 312 artists. Of those, 104 artists are Iranian while 208 hail from other countries such as Indonesia, Brazil, France, Turkey and China.

According to Fars, Tabatabayee said the purpose of the competition is to “display the West’s double standard behavior towards freedom of expression as it allows sacrilege of Islamic sanctities… but prevents research on the Holocaust due to the Zionist regime’s steadfast opposition.” Read more.

Netanyahu: ‘We’re Only Two Seats Away From A Strong Right-wing Government’

83 People In Long Island Being Monitored For Possible Coronavirus Exposure