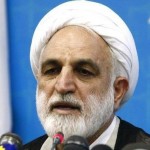 Hours after U.S. Sen. Barbara Mikulski (D-Md.) announced that she would back President Barack Obama’s nuclear deal with Iran, ensuring enough supporting votes to prevent an override of a presidential veto of any Congressional rejection of the pact, a senior Iranian Revolutionary Guard commander said the Islamic Republic will continue strengthening its military capabilities until it has defeated Israel.

“They (the U.S. and Israel) should know that the Islamic Revolution will continue enhancing its preparedness until it overthrows Israel and liberates Palestine,” said Brigadier General Mohsen Kazzemeini, Iran’s Fars News Agency reported.

“We will continue defending not just our own country, but also all the oppressed people of the world, especially those countries that are standing on the forefront of confrontation with the Zionists,” he said.

A source close to Israeli Prime Minister Benjamin Netanyahu responded Wednesday to the news of Obama clinching Congressional support of the nuclear deal, stating that “the prime minister said before addressing the Congress in March that it is his duty to present Israel’s grave concerns about the deal with Iran to the American people and their representatives,” the Times of Israel reported.