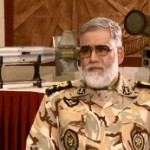 “If Israel makes any move, we will respond with the Islamic Republic of Iran’s long-range missiles,” said Brigadier General Ahmad Reza Pourdastan. He added that Tehran would not hesitate to use its military capabilities to “direct fatal blows” to the Jewish state and “possibly erase it from existence.”

Referring to Iranian Supreme Leader Ali Khamenei’s assertion in September that Israel — which he called a “fake regime” — would be destroyed within 25 years, Pourdastan said Iran was “very eager to see Israel make a stupid move to put the Supreme Leader’s remarks into action as soon as possible.”