A bomb explodes in Burgas, Bulgaria, leaving five Israeli tourists and a local driver dead. Mysteriously marked ammunition kills countless Africans in civil wars. Conspirators plot to blow up a crowded cafe and an embassy in Washington, D.C. A popular prime minister is assassinated, and a despised dictator stays in power by massacring his people by the tens of thousands.

Apart from their ruthlessness, these events might appear unrelated. And yet the dots are inextricably linked. The connection is Iran.

In 25 cities across five continents, community centers, consulates, army barracks and houses of worship have been targeted for destruction. Thousands have been killed. The perpetrators are agents of Hezbollah and the Quds Force, sometimes operating separately and occasionally in unison. All take their orders from Tehran.

Hezbollah’s relationship with Tehran is “a partnership arrangement with Iran as the senior partner,” says America’s director of national intelligence, James Clapper. The Lebanon-based terror group provides the foot soldiers necessary for realizing Iran’s vision of a global Islamic empire. Hezbollah chief Hassan Nasrallah says his organization was founded to forge “a greater Islamic republic governed by the Master of Time [the Mahdi] and his rightful deputy, the jurisprudent Imam of Iran.”

With funding, training and weapons from Iran, Hezbollah terrorists have killed European peacekeepers, foreign diplomats and thousands of Lebanese, among them Prime Minister Rafiq Hariri. They have hijacked American, French and Kuwaiti airliners and kidnapped and executed officials from several countries. They are collaborating in Bashar Assad’s slaughter of opposition forces in Syria today. 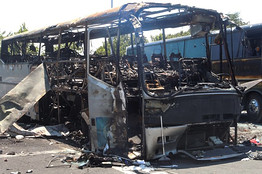 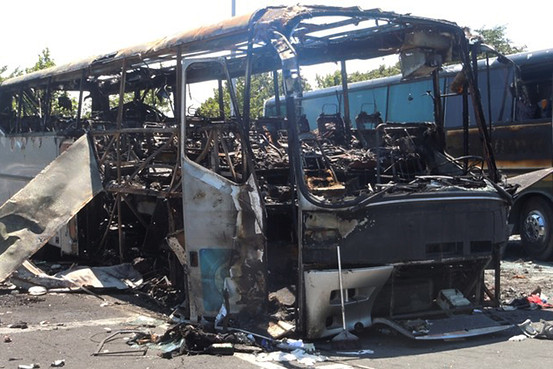 Second only to al Qaeda, Hezbollah has murdered more Americans-at least 266-than any other terrorist group. The United States designated Hezbollah as a terrorist organization in 1997, though the European Union has yet to do so.

Above all, Hezbollah strives to kill Jews. It has fired thousands of rockets at Israeli civilians and tried to assassinate Israeli diplomats in at least six countries. Its early 1990s bombing of a Jewish community center and the Israeli Embassy in Argentina killed 115.

The attack in Burgas occurred last July, and this month the Bulgarian government completed a thorough inquiry into who was behind it: Hezbollah. “The finding is clear and unequivocal,” said John Kerry in one of his first pronouncements as U.S. secretary of state. “We strongly urge other governments around the world-and particularly our partners in Europe-to take immediate action and to crack down on Hezbollah.”

Then there is the Quds Force, the elite unit of Iran’s Revolutionary Guard Corps, which takes orders directly from Iranian Supreme Leader Ali Khamanei. The U.S. has repeatedly accused the Quds Force of helping insurgents kill American troops in Iraq and Afghanistan, and of supplying weapons to terrorists in Yemen, Sudan and Syria. In 2007, Quds Force operatives tried to blow up two Israeli jetliners in Kenya and kill Israel’s ambassador in Nairobi.

Hezbollah and the Quds Force also traffic in drugs, ammunition and even cigarettes. Such illicit activities might seem disparate but they, too, are connected to terror and to Tehran.

In 2011, the New York Times reported that Hezbollah was working with South American drug lords to smuggle narcotics into Africa, the Middle East and Europe. The terror group laundered its hundreds of millions of dollars in profits through used-car dealerships in America.

Also in 2011, the FBI exposed a plot in which senior Quds Force operatives conspired with members of Mexico’s Los Zetas drug cartel to assassinate Saudi Arabia’s ambassador to Washington by bombing the restaurant where he dined. The Israeli Embassy in Washington was also targeted. The middleman between the terrorists and the drug dealers was an Iranian-American used-car salesman.

And still the dots proliferate. U.S. authorities have implicated Hezbollah in the sale of contraband cigarettes in North Carolina, and Iran has manufactured and sold millions of rounds of ammunition to warring armies in Africa. So while skirting Western sanctions, Iran funds terror world-wide.

But Iran’s rulers are counting on the West’s inability to see the larger pattern. Certainly the European Union would take a crucial step forward by designating Hezbollah a terrorist organization, but terror is only one pixel.

Tehran is enriching uranium and rushing to achieve military nuclear capabilities. If it succeeds, the ayatollahs’ vision of an Islamic empire could crystallize.

Iran and its proxies have already dotted the world with murderous acts. They need only nuclear weapons to complete the horrific picture.

Mr. Oren is Israel’s ambassador to the United States.

Listen: The Daily Tefila4Life Shiur On Matzav.com: Where is Moshiach?