Rabbi Yitzchok Elefant, Shlita, an American born Chief Rabbi of Dimona in southern Israel for almost 40 years, says it can and must be done! To explain: all over Israel there are more than 15,000 shuls, and almost all have no rabbanim at all! This is something hard for Americans to grasp; they cannot understand what a kehila would look like without a Rav. Who will answer halachic questions when necessary, and give shiurim daily? Who will provide encouragement to the new bar-mitzvah boy to strengthen him to continue coming to shul and grow in his Yiddishkeit? These are obviously tasks of a shul Rav. Similarly, when a death in the family occurs, Chas Veshalom, the first thing a frum Jew in the US would do is to approach the rabbi on how to go about the burial, shiva, and the like, and to get emotional support. A shul or community Rav plays a most critical role in the United States. This is not so in Israel. Israel would be a completely different country if shuls in all parts of Israel had Rabbonim who give shiurim, comforted mourners when necessary, guide Bar-Mitzvah boys, help people with their shalom bayis issues, and accomplish all the tasks of a qualified Rav.

About Dimona’s Chief Rabbi and his plan

Rabbi Elefant, the grandson of the illustrious Rabbi Eliezer Kirzner Z’l of Boro park, is a musmach of Yeshiva Emek Halacha from Rabbi Tovia Goldstien Z’l. In addition, he has smicha from the Israeli Chief Rabbanit- a Smicha at the level of a Chief Rabbi of a town. He is certain that if caring, devoted Rabbanim could be hired at a fair but reasonable salary to service the large number of currently leaderless shuls all over Israel, there would be a revolutionary surge of Torah growth in the country!

The Rabbi’s Goals and some Achievements

Rabbi Elefant’s goal is to train local Bnei Torah and to place them in local shuls all over Israel to be Rabbanim and serve as their leader. He has come up with a plan that will offer opportunities to Jews from all over the world to sponsor a Rav for each shul that is currently without one. In addition to his regular responsibilities, he is currently training and placing rabbonim in shuls all over Israel! As of now, he has 18 Rabbonim in 30 shuls in 10 towns that he funds, and they develop a personal connection with their congregants on their own level of Yiddishkeit. These Rabbanim are Ashkenazim and Sephardim, black kippot and knitted kippot, with one condition-shyirasam kodemes lechochmosom. Indeed, major changes have been seen among religious, traditional, and secular Jews. For example, one of the rabbis that he placed is Rabbi David Raz. He conducts daily shiurim attended by 20-25 people. 40 people attend his shul on Shabbos in Netivot, and 20 attend his Gemara shiur there. At the same shul, during shalosh seudos, many of the members have risen to the level of being able to create and say a Divrei Torah publicly themselves, an achievement that they would have not dreamed about a few years back! Rabbi Raz says that through the shiurim, speeches, and communal activities that are taking place in the shuls, many families are now Shoimrei Shabbos, observe taharas hamishpacha, and send their children to religious schools. Rabbi Raz also visits the sick and consoles mourners. He says that these kinds of actions bring people closer to their religious roots.

What is required to get this project started, and what will follow afterward?

The sum of $8,000 is needed annually to enable each shul to hire a Rav. Each $8,000 donation will enable us to hire another Rav. Of course, all contributions are greatly appreciated.

When the required $8,000 per shul is acquired, Rabbi Elefant will immediately assign a shul to one of the 50 Rabbanim already approved to fill such a position. He hopes to fill all 50 rabbinical positions soon, at which point he will compile and approve a new list of Rabbanim for the next group of shuls.

Your donation will bring about the following: a significant number of secular Israeli families will become part of the Orthodox world, they will start to send their children to yeshivas, and they will become (and remain) more observant by having a connection with a qualified Rav. This will guarantee the continuation of the chain of true Torah Judaism in Israel for generations to come. This plan has the blessing of Rav Elyashiv ZL and Rav Chaim Kanievsky Shlita.

THE SPIRITUAL GROWTH OF THESE SHULS AND COMMUNITIES WILL BE IN YOUR ZECHUS!

If the Israeli government pays for official Rabbanim, why is there a need for Rabbi Elefant’s project?

First, there are very few official Rabbanim to cover everyone. Dimona, for example, has only 3 official Rabbonim for 72 shuls. This is just one example of what is common all over the country. Secondly, due to the Israeli supreme court ruling that reform rabbis must also be appointed, no new Rabbonim were appointed in the last 20 years. As a result, while 20 years ago there were about 500 local Rabbonim paid for by the government, there are barely 100 left with the numbers steadily decreasing due to death or retirement.

To date, Rabbanim under Rabbi Elefant’s guidance are serving in Dimona, Yerucham, Arad, Netivot, Beer Sheva, Yerushalayim, Beitar, Lod, Ramla, and Ashdot. The fact that a Rav is in shul on a daily basis and that he firmly sticks to his fixed program of shiurim and activities, as well as taking a sincere interest in each family, keeps the Mispalleim returning again and again to the shul for support and encouragement on a steady basis. Progress on a religious level has been seen in many shuls. Each rabbi stresses the exponential growth in Ruchanius that he sees happening in front of his eyes! Even if a congregant does not come to shul on Shabbos, the fact that there is a Rav on hand for a family in times of joy and sadness makes a huge difference and encourages people to move closer to Yiddishkeit.

Looking forward to your joining this fantastic opportunity and sharing in this transformation of our Jewish brothers and sisters in Israel- what could be a bigger zechus before Yom Hadin! KESIVA V’CHASIMA TOVA!

Listen: Rabbi Avrohom Asher Makovsky’s “Daily Dose of Chesed” Podcast on Matzav.com – Even When Doing a Great Mitzvah, Be Careful Not to Embarrass...

Listen: The Daily Tefila4Life Shiur On Matzav.com: Why Is Embarrassment Negative? 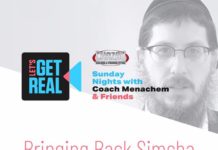