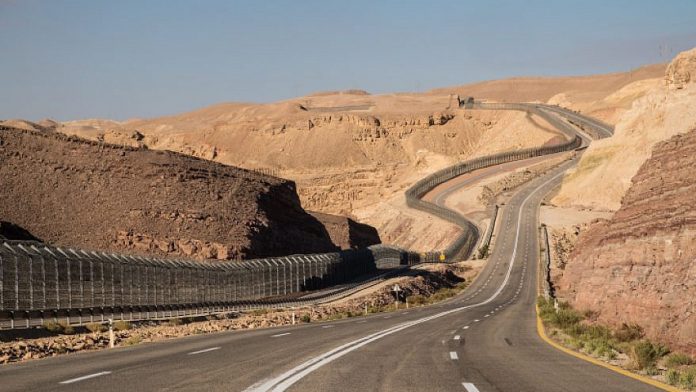 Many have pointed to Israel’s security barrier in Judea and Samaria as being one of the primary contributors to the reduction in Palestinian terrorism since the years of the Second Intifada, from 2000 to 2005. However, a growing chorus of experts disputes this notion, while pointing to the barrier instead being used as a political tool to divide the land.

A new study on Israel’s separation fence in Judea and Samaria asserts that while the yet-to-be-completed barrier was constructed under the guise of security against Palestinian suicide-bombers (only around 62 percent of the 790-kilometer route has been erected), the fence is in reality a political apparatus, which would likely become an international border between Israel and a future Palestinian state.

And that border, according to Maj. Gen. (res.) Gershon Hacohen of the Begin-Sadat Center for Strategic Studies (BESA), who conducted the study in conjunction with the Kohelet Policy Forum, would lead to Israel’s demise.

“If this fence becomes a border, it will be suicide for Israel,” he tells JNS. “We are facing a new reality in which the Iranians are trying to attack Israel from all directions: Hamas in Gaza, Iranian militias in the Golan, Hezbollah in Lebanon, etc. Who will be able to inspect if they are deploying forces by proxy armed with rockets in Judea and Samaria if we go with the ‘separation plan [between Israel and the Palestinians]?’ What we are engaging along the Gaza border and Lebanon, it will be the same in Kfar Saba, Rosh Ha’ayin and Tel Aviv. The only reason it’s not happening now is because of the operational freedom of the IDF.”

Hacohen, who was a battle-tested IDF commander for 42 years, says that the decision to construct the barrier back in 2002 was an attempt by Israel’s leadership to “manipulate public opinion in Israel using anxieties from terrorist attacks and suicide-bombings in the name of security.”

He is adamant that while some experts claim that the fence reduced attacks inside Israel’s population centers by up to 90 percent, “it wasn’t the fence, but the permanent day and night IDF activities inside [Palestinian Authority] cities and refugee camps [that reduced attacks]” during what Israel dubbed “Operation Defense Shield.”

That military campaign was launched by Prime Minister Ariel Sharon following the 2002 Passover massacre at the Park Hotel in Netanya, where an Arab suicide-bomber murdered 30 Israelis enjoying a seder meal and service.

Hacohen says that while a fence might work on the U.S.-Mexico border to reduce illegal immigration and the flow of potential criminals into America—with Trump referencing a belief in the effectiveness of Israel’s “wall” in a recent meeting with democratic leaders—he doesn’t believe that is the case with the Jewish state.

“Even while former U.S. Ambassador to Israel Martin Indyk claimed that ‘good fences make good neighbors,’ that’s absolutely not true. Putting a fence between Israel and Gaza [as was done in the 1990s] didn’t lead to making good neighbors, as the fence didn’t change the motivation of the [Arab] struggle against Israel. Actually, because of the fence we lost freedom of action from an operational point of view, so it was a mistake.”

Turning his attention back to the Judea-Samaria barrier, Hacohen says his study shows that the fence “went from being a tactical instrument to being a strategic engine to just divide the land.”

He adds that Knesset member Tzipi Livni, head of Israel’s opposition, is “making all efforts to divide Israel” utilizing the barrier as the official border in her plan of “separation” between Israel and the Palestinians.

Director of the Project on Political Warfare at the Jerusalem Center of Public Affairs Dan Diker disagrees somewhat with Hacohen on the original intent of the barrier. He tells JNS that “Sharon’s original idea was to put the fence deeply east in order to depict that the purpose was for security, and make it clear that it would not be a final political border, but rather be used to stop [potential] suicide-bombers [entering Israeli cities] from Judea and Samaria.”

Diker explains that in 2003, the original route of the fence was to envelope 16 percent of areas in Judea and Samaria west of the fence. However, petitions filed by left-wing Israeli groups on behalf of Arab landowners led the Israeli Supreme Court to view the move as a “land grab,” and so ruled that the barrier had to be rerouted, thus only around 8 percent of the area was included.

He says that Sharon had hoped to protect as many residents of Judea and Samaria as possible with the fence, while at the same time was trying to gain acceptance of the original route by the United States, using the planned Gaza pullout as a way to buy political capital. But Israel’s Supreme Court had other considerations.

The fence, therefore, developed into “a mixture of the original idea.”

He describes that “it became a temporary barrier to guard against terror penetration, but has become a political football. Any barriers that run through Judea and Samaria are political. This route encompasses 85 percent of Jewish residents [of Judea and Samaria], and only less than 1 percent of Palestinians, which means the current fences’ contours are similar to the Clinton parameters of 2000,” referencing the failed talks overseen by U.S. President Clinton between Israeli Prime Minister Ehud Barak and Palestinian/Fatah head Yasser Arafat at Camp David.

Diker says the barrier has become understood by past U.S. governments, and even among some in the Israeli public, as more or less in terms of what borders would look like in a final political deal since the route includes the Ariel bloc of Jewish communities, ensuring that a high percentage of Jewish residents would be part of “Israel.”

However, Diker warns, “the security barrier does not provide Israel with defensible borders in the West Bank which are vital to protect Israel’s major cities, Ben-Gurion Airport and major infrastructure. The Trump administration seems to understand Israel’s requirement for defensible borders, especially retaining the Judea and Samaria hill ridge and the Jordan Valley.”

But not all Israelis are on board, including some of those in Judea and Samaria who would be on the Western side of the barrier in a final deal. One of the most vocal opponents of the fence is Oded Revivi, the mayor of the Gush Etzion community of Efrat.

The planned route of the barrier in that area, which would include Efrat (aside from a section of the community that hasn’t been developed) along with Western Gush Etzion, has not been constructed yet. Revivi hopes it never goes up.

He argues that fences don’t really provide security. He tells JNS that his belief is based on three examples. “Number one, we built a fence on the southern border with Gaza, and what did we get? Missiles over the fence, so we installed Iron Dome [essentially], raising the fence to endless heights to catch rockets. Then we got the tunnels, and we dug underground, so we are in an endless challenge of raising and lowering the fence. And now there are [incendiary] kites. So it’s all a false sense of security.”

“Secondly, after 9/11, we started surrounding airplanes with fences [in the form of airport security], so we got attacked in the terminals before you board the plane. So they then move the security ‘fence’ outside the terminal, and it’s never-ending.”

“And third, in Efrat, we don’t have a barrier, so there should have been a wave of suicide bombings. But there weren’t.”

In line with Hacohen, Revivi thinks that the reduction in terror is a result of “IDF action and more intelligence and security.” He also believes the Palestinian Authority has changed their mindset, understanding that images of the carnage from suicide-bombers in Israeli cities aren’t good for their PR efforts or for their optics.

Professor Hillel Frisch, an expert on Palestinian and Islamic politics, institutions and military strategies at BESA, has does extensive research on what halted the wave of suicide-bombings in the early 2000s.

He says that ever since Israel developed an offensive strategy in 2002, which granted the IDF and other security forces access to “Area A” under full Palestinian Authority control in order to arrest terrorists on a nightly basis, which continues until today, there has been a sharp reduction in suicide-bombing attacks. He views the fence as being a supplementary measure only in achieving security.

But what about the recent deadly shooting attacks in Judea and Samaria? How can they be explained? According to Frisch, “since the mid-1980s, there has been an incessant attempt by Hamas and Islamic Jihad to create professional terror cells. It never ends. Now most of them are nipped in the bud. Less than 5 percent of the cells are under the radar, and of those, 1/10 become very lethal. The last two cells [that carried out the deadly attacks in recent weeks in Binyamin] were local cells with efficient killers. But around 95 percent are caught.”

Nevertheless, while both Frisch and Hacohen clearly believe that an offensive approach to terror should be Israel’s strategy, neither goes so far as to call for Israel to tear the security fence down. “It does make a small contribution,” acknowledges Frisch, as one of his studies shows that there is a slight benefit—a reduction in successful attacks in areas where the fence exists compared to areas where there is no fence.

So regarding the idea of eliminating it, Hacohen responds: “Not now, it’s already there.”

However, he adds, “I wish that one day we will destroy it. The investment was more than 15 billion NIS [$3.9 billion] . With that money, we could do more to improve our army.” JNS.ORG