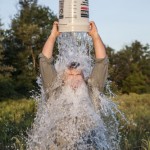 The hottest month of summer was ice cold, as thousands of people poured buckets of ice water over their heads to raise awareness about amyotrophic lateral sclerosis (ALS) and money for researching the fatal neurological disease. In just a few weeks, three million donors helped raise more than $100 million, blowing the $2.7 million the ALS Association raised during the same time period last year out of the water.

The Facebook frenzy created by the ALS Ice Bucket Challenge has now been replaced by back-to-school photographs, but the results have left leading Jewish organizations asking themselves, “Is this the fundraising wave of the future?”

“I don’t believe fundraising is going in that direction,” said J.M. Schapiro, 2014-15 fundraising campaign chair for The Associated: Jewish Community Federation of Baltimore.

Schapiro told JNS.org that while the Ice Bucket Challenge was “fun and exciting,” there was “an extraordinary confluence of events that brought it together. … I don’t believe it is something you can manufacture.” But he still believes there are best practices fundraisers can learn from the ALS campaign.

“How do you look at things differently, [and] use social media and other new ways to raise money?” Schapiro said, noting some of the items he and his campaign team are discussing.

The Jewish National Fund (JNF) is at the forefront of new media use. It recently formed a digital marketing committee, with leaders from the upper realms of technology superstars, such as AOL. JNF CEO Russell Robinson said the organization launched the hashtag #PoweredByJNF and is now actively using text-to-pledge mobile fundraising technology.

“We are spending an enormous amount of time studying digital space and being pioneers, making sure we are at the forefront,” said Robinson. “Where the people are, we have to be.”

Robinson told JNS.org that he thinks one of the challenges for Jewish organizations is to not take themselves so seriously in the digital realm. Often,”we are too conservative in the Jewish community,” and when it comes to social media, “you have to be a little bit funny” to be successful, he said.

Jay Feldman, managing director of the Alpha Epsilon Pi (AEPi) Foundation, said he agrees that social and new technology was certainly “the secret sauce” of the ALS campaign, but that what struck him as the most impressive aspect of the effort was the “peer-to-peer, grassroots” component. He said the initiative was low-barrier, while the impact was tremendous.

Feldman explained that when it comes to making something go viral, “you never know what is going to morph.” He said Jewish organizations should use the Ice Bucket Challenge as an opportunity to take a hard look at how creative their marketing efforts really are, and as inspiration to come up with something different and unique for their own organizations.

AEPi fraternity members run a nationwide fundraising campaign each year, donating the proceeds to Israeli and Jewish causes or other efforts that members feel passionate about. For decades, the organization has charged its campus chapters with determining how to raise the money at their schools. Some efforts have been more successful and novel than others. Some have caught on almost as much as the Ice Bucket Challenge, albeit on a local level.

At the University of Missouri, for example, the fraternity a few years ago launched the AEPi Rock-A-Thon, in which its members would spend 72 hours rocking in a rocking chair on campus. Students and community members were so impressed they also started rocking, and today the whole city of Columbia, Mo., is involved.

“They put a rocking chair in the center of town for a three-day event with musical performances and vendors. The news stations come out and the mayor gets involved,” Feldman told JNS.org.

Yeshiva University (YU) had its own Ice Bucket Challenge-like success a few years back when the Maccabeats’ “Candlelight” Hanukkah song went viral on YouTube, recalled YU President Richard Joel. To date, more than 9 million people have watched the “Candlelight” video.

Feldman said one has to be careful about “romanticizing” social media and e-philanthropy.

“I think those tools are valuable, but traditional methods of engaging donors still exist,” he said.

“It is not just Internet fundraising, but [asking] ‘Do you have the kind of message that people will own?'” he said.

The Associated’s Schapiro saw that firsthand last Hanukkah, when the federation ran its #whatisyourissue campaign for its young adult division. The organization proposed eight issues of importance to the Jewish people, and then at its annual “Latkes and Vodka” event asked participants to narrow those issues down to three. After the event, campaigners focused their fundraising messaging to the younger cohort around the issues they identified as most important to them: Israel, special needs, and community building.

“We raised 25 percent more from that audience last year than in years prior,” Schapiro said.

This year, Schapiro launched the “100-Day Challenge,” calling on philanthropists to donate before the end of the calendar year. He sent personal letters to donors and has witnessed a strikingly large and eager response.

“People come up to me in restaurants, say they got my letter, and make a pledge,” he said. “Everything is about relationships. Ninety-nine percent of the ice bucket challengers called out their friends, called on those relationships. It’s the same thing we are doing with the Associated campaign, we are leaning on our relationships for help.”

“The federation system has been around for more than 100 years and we have found that our people-to-people network has withstood the test of time,” said Jerry Silverman,  president and CEO of the Jewish Federations of North America. “Not to throw cold water on a one-off campaign, even a wildly successful one, but our success is our sustainability.”

The real question, JNF’s Robinson believes, is what happens next for ALS?

“Will people still remember about ALS in six months?” he asked. “Will these donors still be engaged, still want to give? This will be the next challenge.”