The Hamodia newspaper seems to have had a fallout with the Bloomberg campaign.

The Bloomberg campaign has been splurging on other media serving the frum community, such as Yated Ne’eman and the Jewish Press, and the campaign is also plastering web sites that serve the Jewish community. Even Israeli sites such as Haaretz.co.il and the website of the Jerusalem Post are bombarding visitors with flashy banner ads. However, none of the print ads have appeared in the Hamodia newspaper.

Neighborhoods such as Boro-Park, Williamsburg, Flatbush, and Crown Heights have heavy concentrations of frum Jews and were previously a solid base of support for Bloomberg. But the Mayor and his press office have been unavailable and inaccessible in responding to inquiries from Hamodia, according to some sources. Unlike his opponent, Bill Thompson, the Mayor has so far refused to respond to the paper.

Sources claim that the Bloomberg campaign has been trying to strong-arm the Hamodia into endorsing and writing positive puff stories on the Mayor.

“We do not live off NYC taxpayer money and the Mayor has very little leverage over our operations,” the source noted. “We owe our loyalty to our readers, and the Mayor is highly unpopular in our community, if the Mayor wants to reach our community, it’s kind of foolish to ignore us, but that’s just fine with us. The most important thing for us is not to offend our readers.”

Yesterday, as first reported here on Matzav.com, Hamodia upped the ante by downplaying the Mayor’s visit to Boro Park – burying his visit in a story and stating that the “mayor received polite applause” – and featuring an article about a politically connected rabbi who is endorsing Thompson.

In addition, Hamodia printed a lengthy letter to the editor decrying the playing of the race card by Bloomberg operatives within the various Chassidic enclaves, which seems to be a planned strategy since the crime specter threat if the Mayor is not elected was raised many times during a Boro Park event by all speakers in support of the Mayor, including former Mayor Rudy Giuliani. 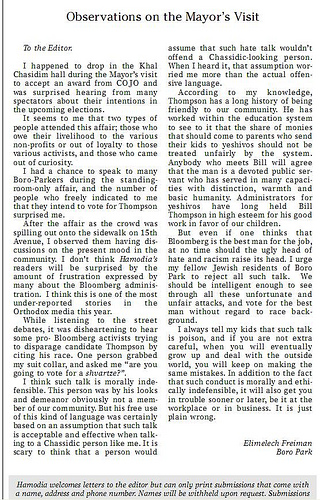 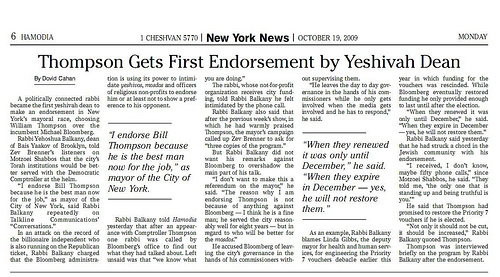 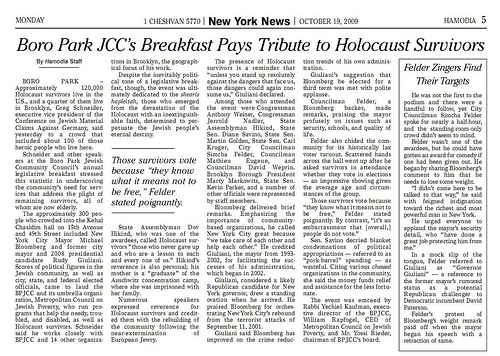