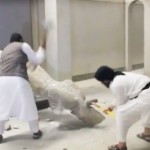 On Thursday, ISIS released a video of its goons ransacking the Mosul Museum and taking sledgehammers and drills to priceless shrines and artifacts.

ISIS loyalists have destroyed a number of precious ancient items in Iraq as part of an orchestrated campaign to “eliminate what they view as heresy,” according to the AP.

The five-minute video also shows a man destroying an item that dates back to the 7th century B.C.E. at a nearby archaeological site.

ISIS is also believed to have sold some artifacts on the black market to finance its terrorist campaigns. In July, Christopher Dickey warned that ISIS was on the verge of destroying Mosul’s collection of biblical artifacts. Read more.