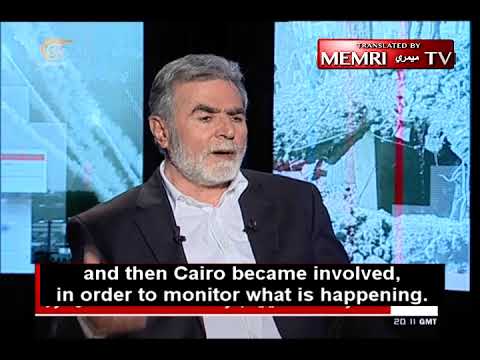 In an interview with Lebanese Mayadeen TV last week, Palestinian Islamic Jihad leader Ziyad Al-Nakhaleh said the terrorist group had demonstrated only a portion of its “power and determination” in its armed conflict with Israel earlier in May. He went on to say that his organization had “sufficient capabilities for a prolonged confrontation.”

Referring to the events of May 3-6, he said “these past few days were only a live-fire exercise for the resistance,” adding that he is certain that “a greater battle with the Zionist enemy is yet to come.”

Al-Nakhaleh said that the PIJ had not informed Cairo of its intention to “retaliate” against Israel.

He added that during the first day of fighting there was no communication with the Egyptians and that the Egyptians “were not pleased that this confrontation broke out” while the PIJ and Hamas delegations were still in Cairo.

Al-Nakhaleh thanked Hamas leader Yahya Sinwar for his cooperation during the conflict, adding that they had agreed to join forces from the start. Al-Nakhaleh said his organization has “the will, the power and the courage to target the Israeli cities surrounding Gaza, and that “it was only hours before we would have bombed Tel Aviv.”

Ziyad Al-Nakhaleh: What the resistance has demonstrated in this war—and I do not want to exaggerate—is only a portion of its power and determination in confronting this aggression. The resistance has sufficient capabilities for a prolonged confrontation.

I believe that these past few days were only a live-fire exercise for the resistance and I am certain that a greater battle with the Zionist enemy is yet to come. We were—and we still are—ready for the battle that Israel is planning, in the framework of the political solutions that may be proposed in the coming weeks.

Interviewer: So you informed Cairo that you were going to retaliate …

Ziyad Al-Nakhaleh: We did not inform Cairo. We retaliated on the battlefield, and then Cairo became involved, in order to monitor what was happening. I think that on the first day we had no communication [with the Egyptians.] I won’t say that the Egyptians were angry, but they were not pleased that this confrontation broke out while we were in Cairo.

Interviewer: What did they say to you?

Ziyad Al-Nakhaleh: They did not say anything, but I interpreted the fact that Cairo did not intervene on the first day as an expression of their disapproval with what had happened, especially since this took place while we were in Cairo. I think that Cairo considered this to be a breach of protocol.

I would like to thank the brother [Hamas leader] Yahya Sinwar, because there was important cooperation [between Hamas and the PIJ]. We made a joint decision to confront the enemy.

Interviewer: Yahya Sinwar was also in Cairo, with the Hamas delegation …

Interviewer: So Hamas agreed with your position right from the start?

Ziyad Al-Nakhaleh: We have the will, the power and the courage to target the Israeli cities surrounding Gaza. One more thing: It was only hours before we would have bombed Tel Aviv.