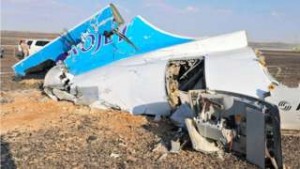 The bodies of 100 of the 224 people who were on board the Russian plane that crashed in the Sinai Peninsula this morning were found by noon.

According to Egyptian reports, there were no survivors in the crash. The plane had taken-off from Sharm el-Sheikh and headed for Saint Petersburg. “Most of the victims died with their seatbelts still on,” a source associated with the Egyptian investigation of the crash stated. Among the victims are five children.

An Islamic State affiliate in the Sinai Peninsula claims to be responsible for the crash. It claims to have had downed the plane to avenge Russian airstrikes in Syria. However, the report is put into question, since official reports in Egypt claimed the crash was a result of a technical problem in the plane. The Russian Ministry of Transportation rejected the Islamic State statement, asserting such a claim was “not possible.”

Following the incident, Lufthansa and Air France announced they will not be flying over the Sinai area until the investigation of the crash is completed.

Hundreds of friends and family members of the victims have gathered at the Pulkovo airport in Saint Petersburg. An Egyptian official told Reuters that the plane had split into two parts; the back part burned completely and the rest crashed into the side of the mountain.

The MetroJet aircraft took-off from Sharm el-Sheikh in the Sinai Peninsula at approximately 6:00 am. Its destination was Saint Petersburg. 23 minutes after taking-off the Airbus disappeared from the radar. Its debris was found some 100 kilometers south of the Israeli city of Eilat. According to local media reports, the pilot reported a technical problem shortly after take-off and requested to perform an emergency landing in a nearby airport.