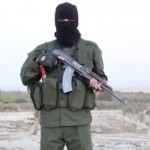 The leader of the Islamic State terrorist group, Abu Bakr al-Baghdadi, issued an explicit threat against Israel today, the first such indication from the organization’s head that the Jewish state was on his agenda.

In an audio recording released on social media, al-Baghdadi warned that his forces will “soon meet [the Jews] in Palestine,” Israel’s Channel 2 television reported.

The terrorist group’s elusive head added that “Israel will pay a heavy price at the hands of our fighters,” the report said.

“Palestine will not be your land or your home,” al-Baghdadi continued, according to the Ynet news site. “It will be a graveyard for you. Allah has gathered you in Palestine so that the Muslims may kill you.”

“The Jews thought that we forgot about Palestine and diverted our attention from it. Never, Jews. We have not forgotten Palestine for a moment,” said al-Baghdadi.

“The leaders of the jihad fighters will surround you on a day you think is far, but we see it as close. We are coming closer to you day by day,” he concluded.

In a video released last month by the Islamic State, the group threatened to wage war against the Jewish people. Flanked by masked militants holding automatic machine guns, a man brandishing a knife can be seen saying that he and his jihadist comrades are “preparing for a major war [against Israel]… With God’s help, God willing.”

In a message directed to “all the Jews, grandchildren of monkeys and pigs,” the man, whose face is blurred, warned that the Islamic State plans to infiltrate Israel to carry out attacks.

“We are coming for you from all over the world to slaughter you,” he said. Read more at Times of Israel.