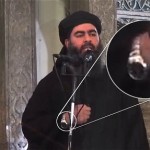 The emergence of the highly-secretive Abu Bakr al-Baghdadi from the shadow of Iraq’s sectarian crisis put a face to the threat of a global Islamic caliphate.

The Islamic State leader spoke publicly for the first time at Mosul’s Great Mosque of Friday, an intervention in which he called on the world’s Muslims to “obey” him as “the leader who presides over you”.

But the self-anointed ‘Caliph Ibrahim’ also brought a touch of branding into the bloody conflict, with many who have seen the 20-minute sermon commenting on his bulky and expensive wristwatch.

Appearing in black robes and a turban in an attempt to evoke memories of the last Caliphs to rule from Baghdad, the jihadist broke with the tradition to sport an ill-fitting chrome watch with a dark face.

His choice of accessory, which is believed to be either a Rolex, Sekonda or £3,500 Omega seamaster, has been highlighted as jarring with the content of his controversial speech.

He said that under the Islamic State’s direction the Muslim world would be returned to “dignity, might, rights and leadership”.

“I am the wali (leader) who presides over you, though I am not the best of you, so if you see that I am right, assist me,” he added.

“If you see that I am wrong, advise me and put me on the right track, and obey me as long as I obey God in you.”

Video footage of Baghdadi’s appearance, the veracity of which is disputed by the Iraqi government, was posted on Youtube and prompted an outpouring of confused comments on social media.

The watch bore an obvious resemblance to models designed by a number of famous watchmakers, including the £3,490 Omega seamaster Aqua Terra and a much cheaper Sekonda time piece.

Other Twitter users attacked the Islamic State leader for attempting to cast himself as the successor to a group of Islamic rulers who presided over the Abbasid empire more than 1,000 years ago.

Speaking at Ramadan prayers on Friday, Baghdadi hailed the jihadi “victory” in Iraq which he said had restored the caliphate after centuries.

“God gave your mujahedeen brothers victory after long years of jihad and patience… so they declared the caliphate and placed the caliph in charge,” he said.
“This is a duty on Muslims that has been lost for centuries.”

In the address he also called on doctors, judges, engineers and experts in Islamic jurisprudence to help develop the caliphate.

Read more at The Telegraph.