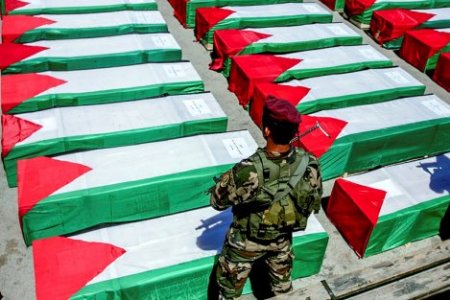 Israeli and Palestinian negotiators met in Yerushalayim tonight for the first substantive talks for five years.

The negotiations, brokered by the US after months of intensive shuttle diplomacy, opened at an undisclosed location less than 24 hours after Israel released 26 long-term Palestinian terrorist prisoners.

In an unexpected move, Israel has reportedly agreed to hand over dozens of bodies of Palestinian terrorists buried in Israeli cemeteries as part of a package of measures to encourage peace talks.

Despite securing the release of a total 104 prisoners in stages over the next nine months, Palestinian leaders reacted furiously to a series of Israeli statements about new settlement construction in recent days.

Senior Palestinian official Yasser Abed Rabbo warned that the talks could collapse. “Settlement expansion goes against the US administration’s pledges and threatens to cause the negotiations’ collapse,” he said. “It threatens to make talks fail even before they’ve started.”

The freed prisoners were greeted by thousands of Palestinians in the West Bank and Gaza early today. President Mahmoud Abbas met each of the 11 men who returned to the West Bank with a handshake and a kiss on each cheek outside the presidential compound in Ramallah.

“We congratulate ourselves and our families for our brothers who left the darkness of the prisons for the light of the sun of freedom. We say to them and to you that the remainder are on their way, these are just the first,” Abbas told the crowd.

Among the prisoners released to the West Bank were cousins Mohammed and Hosni Sawalha, who were teenagers when they boarded an Israeli bus in 1990 and attacked its passengers with knives, killing one and injuring several more. After 23 years in jail they returned home greeted by flags and fireworks .

In the small village of Azmout, in the northern West Bank, calves and lambs had been slaughtered for a celebration expected to last at least two weeks.

{Matzav.com Israel News Bureau, The Guardian contributed to this report}