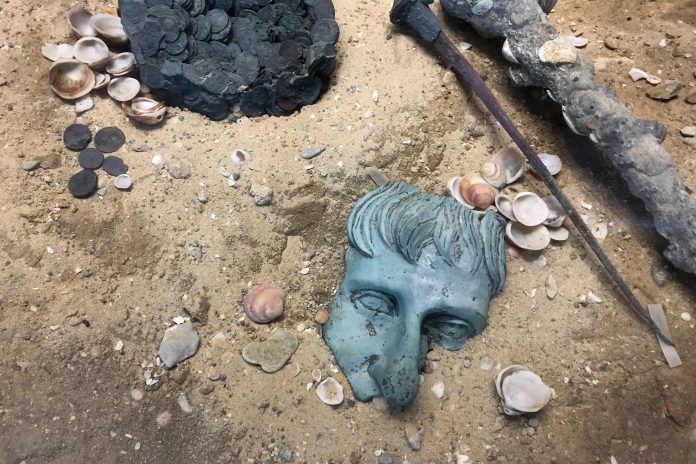 There is no shortage of ancient artifacts in the Holy Land. Some have already been found, and others are just waiting to be discovered.

But the big question is whether fragments of pottery, fraying textiles and decaying manuscripts can elicit excitement these days when people are glued to technology.

The Israel Antiquities Authority thinks so, and it is constructing a multimedia, multi-floored underground complex designed to show off some of the best finds.

Uzi Dahari, the authority’s deputy director, said that Israel has more than 2 million ancient artifacts in storage that can’t be squeezed into any of Israel’s existing museums. So the authority is building what he calls an “archaeological campus,” an interactive center where items from every prehistoric and historical period in this fraught land will be stored and displayed.

The center, which is due to be completed in 2018, will also house one of the largest archaeological libraries in the Middle East, specialized archaeological laboratories for rescuing and restoring ancient relics, and climate-controlled storage rooms.

“The center will explain the history of this land and will give everyone the chance to connect with history via archaeology,” the authority’s director, Yisrael Hasson, said during a recent tour of the multiplex.

There are, for example, between 15,000 to 16,000 parchments from the Dead Sea Scrolls collection that were discovered in a cave near the Dead Sea about 70 years ago and have been studied intensely by historians ever since.

And that is just the tip of the iceberg.

Preserving the past and teaching future generations about it is certainly a noble feat, but a question remains: Is there interest in one more antiquities museum in Jerusalem?

The city is already packed with historical sites and museums. The new project will be flanked by the Israel Museum, with its own collection of antiquities, and the Bible Lands Museum, which displays mostly antiquities.

“We don’t want to be in competition with these places,” said Dahari, who is heading the project. “We expect the place to draw researchers who want to learn about the archaeology here, it is the only place where one can learn about Israeli archaeology.”

The new archaeology campus, the National Campus for the Archaeology of Israel, was designed by Israeli architect Moshe Safdie. The building reflects the layering of archaeology, flowing down 10 floors deep into the ground. The upper floors will display a wide variety of mosaics, pottery, manuscripts and other interesting finds, but the 10th floor below ground will hold what Dahari calls the “state treasures.”

Several storerooms with wide portholes line the hallway on that floor. Each room will have a specific type of lighting, temperature gauge and climate control designed to best preserve the historical items. There will be separate rooms for ancient textiles, old coins, bronze, jewelry and manuscripts.

In addition, a dusty, dimly lit hall with a suspended bridge will allow visitors a chance to glimpse thousands of oversize artifacts. It has the aura of a mysterious Indiana Jones adventure.