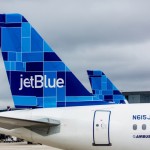 A tense confrontation about the current conflict in Israel led to a Jewish woman being kicked off a JetBlue plane last week in Palm Beach, the Palm Beach Post reports. The trouble started when Lisa Rosenberg, a doctor boarding a flight home to New York, was overheard discussing recent events in Israel while on a phone call.

“I was saying how it was good Israel found the students that killed the Palestinian teenager and how it was exemplary not making them into heroes, but seeking to publicly try them,” Rosenberg said. “I said any other country would have made these students out to be martyrs and celebrating them.”

Rosenberg added that she had never heard of the Palestinians seeking the same sort of justice against one of their own people.

Rosenberg told the Post that after finishing her phone call, she was approached by a woman who identified herself as Palestinian and said she was offended by Rosenberg’s conversation.A verbal confrontation ensued, and Rosenberg was then asked to leave the plane.

Updated: The blogger Flyingwithfish read the airline’s internal reports, which “squarely paint Dr. Rosenberg as the sole instigator of the events on board Flight 454,”

Furthermore both internal reports of the incident clearly lay out Dr. Rosenberg as the person who was in the midst of spewing hateful comments towards the Palestinian passenger in seat 9C, not vice versa.