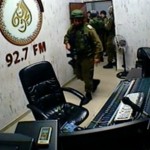 Israeli authorities raided a Palestinian radio station in Hebron before dawn Tuesday on suspicion that the station systematically aired incitement to violence against Israelis. During the raid, conducted by the Israel Defense Forces and the Civil Administration, troops confiscated broadcast and technical equipment, forcing the station off the air.

The Al-Huriya radio station is said to have encouraged violent “resistance” marches.

“The operation to confiscate equipment and close the station was a necessary step in the efforts to rein in the incitement whose results have been obvious over the last month,” said an IDF statement. “The IDF will continue to use every legal means at its disposal to combat terrorists and their accomplices in order to provide security to the citizens of Israel.”

Al-Huriya was established in Gaza in 2002 by Palestine Liberation Organization activists, and was relocated to Chevron after Hamas violently took over the Gaza Strip in 2007. The station has been shut down by Israeli authorities twice: once in 2002 and again in 2008.

Most recently, the station broadcast false claims that Israeli security forces were executing Palestinians and kidnapping Palestinian boys. The station also encouraged stabbing attacks against Israelis and honored the families of terrorists who died while committing attacks.