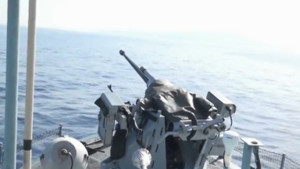 Israel believes the threat of sea infiltrations by Hamas operatives from the Gaza Strip is increasing and is trying to head off such scenarios with a new high-tech cannon.

Israeli news site N12 reported on Thursday that the new type of Typhoon cannon, developed by Israeli company Rafael Advanced Defense Systems, has state-of-the-art optical technology and is aimed by radar, giving it pinpoint accuracy, even in complete darkness.

Testing of the new cannon is set to begin next week.

N12 stated that the IDF thinks Hamas is turning to sea infiltrations because its tunnel system has been badly mauled and Israel’s underground barrier on the Gaza border is nearing completion.

As a result, Hamas is beefing up its naval force, which it views as a potentially significant weapon.

Israel has already constructed a sea barrier to seek to prevent maritime infiltrations, with the new cannon intended to further reinforce its defensive capabilities.