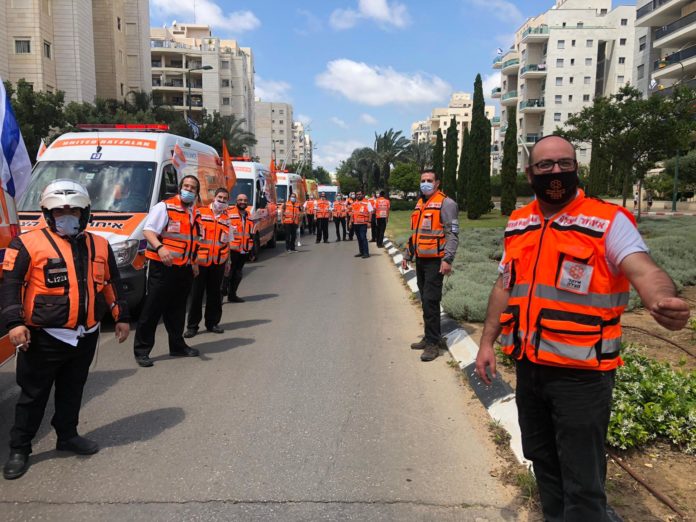 The Israeli government on Tuesday extended by a week a law heavily restricting demonstrations and indoor prayers during the current nationwide coronavirus lockdown.

Ministers approved the extension via a telephone referendum put forward by Israeli Health Minister Yuli Edelstein. The legislation, approved by the Knesset Constitution, Law and Justice Committee last week, will now remain in effect until next at least Oct. 14.

The law restricts protests to a maximum of 20 people at a time, in open spaces, and protesters may not travel more than 1,000 yards (3,000 feet) from their residence to attend. Accordingly, thousands of people participated in hundreds of anti-government protests in various locations around the country on Tuesday, mostly gathering on bridges and at intersections near their homes.

In terms of an exit strategy from the current lockdown, some ministers on Tuesday echoed comments by National Coronavirus Project Coordinator Ronni Gamzu and called for the replacement of the blanket lockdown with “differential restrictions,” easing the restrictions on cities and towns with lower rates of infection while keeping most restrictions in place in areas with high levels of infection.

In the haredi sector, meanwhile—which has come under fire in recent days over reportedly widespread disregard for lockdown restrictions during the Sukkot holiday—Knesset representatives appear to be altering their all-or-none approach to the pandemic.

In an interview with Kan 11 News on Tuesday, Interior Minister Aryeh Deri (Shas) told his constituents he does not oppose the differential model.

“In two weeks, something like that, we’ll partially relax the closure. But let there be no doubt: areas, cities that remain ‘red’ and where the morbidity rate is high, they won’t open. After all, they won’t close the whole country because of a few cities. So these cities will later come to us with complaints and say: Why are these red cities, perhaps Haredi, closed? Yes, once again they’re singling out the haredim. No, friends, whoever doesn’t keep the rules, he’ll eventually have to remain in lockdown,” he said.

An official in United Torah Judaism told Israel Hayom: “If there are infections, what can you do? We believe the scope of morbidity will decrease in the coming days.”

According to Health Ministry data, 10.5 percent of the 44,635 COVID-19 tests conducted on Tuesday were positive, a one percent drop from the previous day and a continuation of a steady downward trend over the past week. As of Wednesday morning, there were 61,606 active COVID-19 cases in the country, 855 of which were considered serious. There were 223 people on ventilators, and the death toll from the pandemic stood at 1,803.

Gamzu said during a Tuesday afternoon press conference that it was too early to tell if the data indicated a significant downward trend in morbidity.

Israeli Prime Minister Benjamin Netanyahu said that while there was cause for “cautious optimism,” he would not be rushing to lift the lockdown.