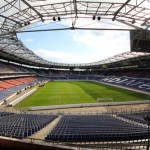 Israel provided key intelligence to Germany two weeks ago regarding an impending terror attack at a soccer stadium, the German magazine Stern reported on Wednesday.

German authorities cancelled a scheduled soccer game between Germany and the Netherlands at Hanover’s HDI Stadium on Nov. 17.

The intelligence Israel received revealed a threat similar to the attacks in Paris four days earlier, including specific times and targets.

“We had received specific indications that an attack with explosives was planned,” Hanover Police President Volker Kluwe told the German NDR state broadcaster. “We took them seriously and that is why we took the measures.”

Visitors who had already arrived at the stadium—which seats more than 40,000—were evacuated from the venue as well as from other locations, including Hanover’s TUI multi-purpose arena (where a concert was about to begin) and a local train station.