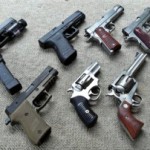 “Over the past few weeks, many citizens assisted the Israel Police to neutralize terrorists in the act. Civilians well-trained in the use of weapons provide reinforcement in the struggle against terrorism,” Erdan said.

The new regulations include allowing people who have served in certain special military units, or who are currently serving in them as part of their mandatory IDF service — or in the reserves — to receive gun licenses.

In addition, all those who have passed certain courses – such as security guards employed by the Israel Airports Authority and those trained for the Shin Bet (Israel Security Agency) – will be allowed to bear firearms.

Meanwhile, Erdan also instructed the Firearm Licensing Department to minimize the bureaucracy involved in approving requests for permits based on a person’s address (i.e. if he or she lives in a neighborhood or settlement considered dangerous).

Former Israel Police prosecutor Nadav Blum, a Jerusalem attorney who has carried a handgun with him at all times for the past 45 years, told The Algemeiner that the ability to obtain licensing for firearms was far easier before 1996, when the 1949 law pertaining to the bearing of firearms was amended.

“The policy on Israeli civilians’ right to bear arms was more liberal before the ’90s,” he said. “It was during that period that it began to be restricted to those who had a specific reason for needing a gun, such as living in what is considered a dangerous neighborhood, in terms of proximity to Arab areas, and/or holding a job (i.e. school principal) or owning a business (i.e. jewelry store) that requires special protection.”

But, Blum added, even those licenses were only good for the period during which the danger still applied; after that, the gun owner would have to surrender the firearm and lose his license.

It is for this reason, Blum said, that really qualified people with excellent military or police history — people who could be useful to security services during times like the current surge in terror – were not at liberty to bear arms.

With the easing of restrictions, he added, there has to be some kind of examination that the people obtaining the permits actually know how to use the guns.

To an outsider, this might sound odd, as Israel has mandatory military service, during which everyone, even those with office jobs, is taught to handle a weapon — at least during basic training.

True, said Blum, “But in the army, the kids learn on long-barreled rifles, like M-16s, which are completely different from short-barreled handguns. The latter require much more training in order to become proficient in their use. It is a common misconception that because Israelis all serve in the IDF and learn how to shoot they are actually capable of using other weapons responsibly.

“Only soldiers in special commando and other elite units know how to use handguns properly, but they are a minority.

“So, just because the current restrictions are eased doesn’t mean that tomorrow, everyone who obtains a license for a firearm will necessarily know how to operate it – without lots of firing-range practice.”

According to Blum, most gun shops in Israel have indoor firing ranges and instructors. There are also outdoor municipal and private ranges. Olympic target-shooting practices are conducted at outdoor ranges, he said. But, there are very few people in Israel with hunting licenses, because most of the animals are protected as endangered species and hunting seasons are short and severely restricted.

Where the current situation is concerned, Blum cited two possible dangers of the new regulations: “One is the potential for innocent bystanders to get caught in crossfire. The other is that a firearm in the hands of someone not very experienced can be snatched away by terrorists.”