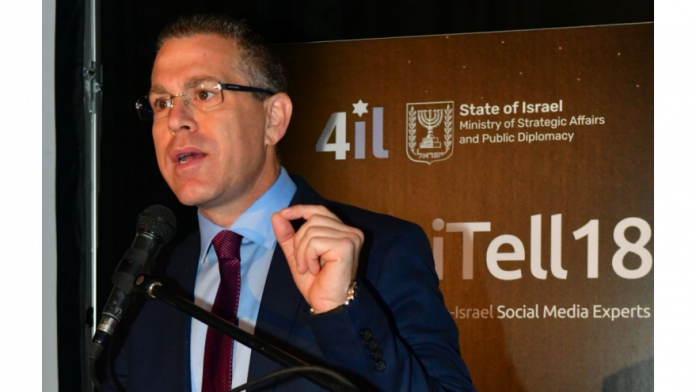 The Israeli government is set to formalize the appointment of outgoing Regional Cooperation Minister and previous Public Security Minister Gilad Erdan as the country’s next ambassador to the United Nations. The appointment is expected to be confirmed during Sunday’s weekly Cabinet meeting.

Erdan is replacing Israel’s current U.N. envoy, Danny Danon, who has served in the role since 2015. He will hold the position for three years, with an option of a one-year extension at the discretion of the foreign minister, Gabi Ashenazi.

A government notice circulated on Thursday states that Erdan also will become Israel’s ambassador to the United States on Jan. 22, 2021—replacing Ron Dermer, who has served in the role since 2013. Erdan will remain in that position for 11 months, during which time he will assume both ambassadorial roles simultaneously.

The short length of latter tenure is in accordance with the coalition agreement signed at the end of April between Prime Minister Benjamin Netanyahu’s Likud Party and Blue and White, headed by Defense Minister Benny Gantz, who will assume the role of prime minister in late 2021. At that time, Gantz will be at liberty to appoint an ambassador to Washington of his own choosing.

The only other Israeli figure to have filled both ambassadorial roles at once was the late diplomat Abba Eban, who served as a dual envoy from 1950 until 1959.

Upon accepting the double appointment in May, Erdan said: “I am proud and excited at the privilege to struggle for our reputation in the international arena and to defend Israel in the challenges ahead in the coming years.”