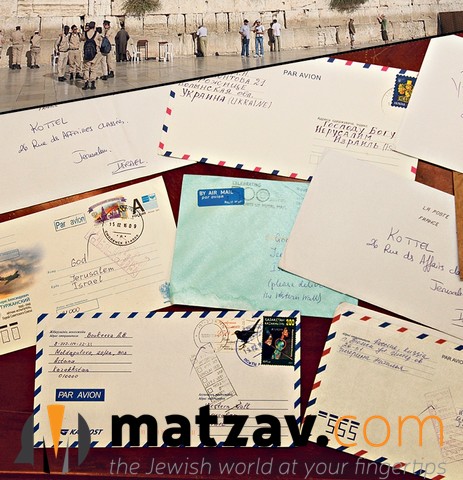 Ever year, ahead of Rosh Hashanah, hundreds of letters are sent to Israel from around the globe addressed “To God,” “Our Father Up Above,” “Kotel” or “The Heavenly Father,” and are inserted between the Kosel’s stones by the Kosel rov, Rav Shmuel Rabinovich.

The Israel Postal Service is swamped with these letters, arriving from dozens of different countries – including the United States, Holland, France, Britain, China, Russia, and even Kazakhstan and Nigeria – as well as Israeli citizens.

Ynet reports that the letters are sent to the postal service’s ‘lost and found’ department and are kept in a special place, and twice a year, during the Aseres Yemei Teshuvah and during December, the letters are given to Rav Rabinovich to put in the Kosel.

This custom was performed on Monday by Israel Postal Service CEO Dan Goldstein.