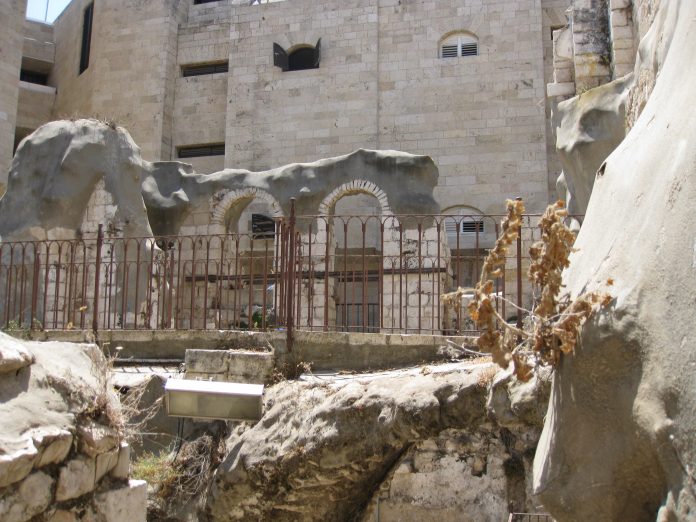 The Tiferes Yisroel Shul was the last post of the Jewish Quarter of the Old City of Yerushalayim to fall in Israel’s War of Independence. The 144-year-old shul rose to great height and came under direct fire from the Har Habayis.

When the Jewish Quarter was lost in 1948, the Jordanians shelled the white dome of Tiferes Yisroel, along with its “twin,” the Churva Shul, and the two landmarks were turned into piles of rubble.

The Churva was rebuilt six years ago and, now, reports Yisrael Hayom, the Israeli government is now reconstructing Tiferes Yisroel.

The plan to reconstruct Tiferes Yisroel is currently being launched, and more historic justice is being done in the form of a new book, “High Upon High,” which relates the history of this shul through the work of 12 contemporary researchers on Yerushalayim and its history, who traced the shul’s history from the day it was founded until it was brought down in the last battle for the Jewish Quarter in the War of Independence.

Tiferes Yisroel is named after Rav Yisroel Friedman of Ruzhin. It took 14 years to construct and was dedicated in 1872.

The new building is planned to serve as both a shul and a tourist site. To avoid repeating the arrangement of the rebuilt Churva Synagogue, which is closed to the public for the several hours a day when it is in use for davening and learning, the district planning office in the Interior Ministry made a number of decisions. For example, the mikveh that will be reconstructed at the site will not be a working mikveh and the building will be barred for use by specific institutions or groups. The reconstruction will be overseen by a restoration architect from the IAA, and the lower levels will be open for public use and made to fit the existing context of the city.

The stunning murals of the original synagogue will be recreated to the greatest extent possible by being redrawn on fabric and then affixed to the building’s walls.

Construction will take three to four years. The government has allocated a budget of 36 million shekels ($9.5 million) to the project, but another 12 million shekels ($3.2 million) in donations is required, money the corporation is busy raising now so that the construction can be completed on schedule.