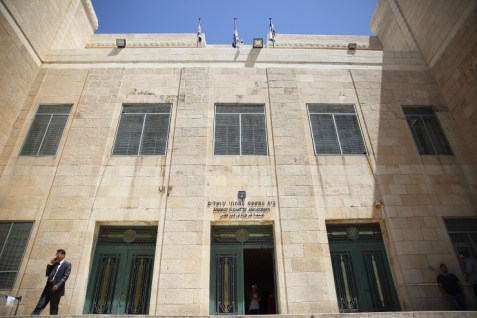 An Israeli-Arab resident of Jerusalem has been arrested and indicted in court for receiving tens of thousands of US dollars from a Hamas operative in Turkey. He allegedly intended to send the money to families of Hamas terrorists, with the intention of encouraging terror attacks against Israelis.

Israel has frequently accused the Palestinian Authority leadership of paying stipends to the families of perpetrators of terror attacks against Israelis, as a way of encouraging such attacks.

The indictment was filed on Friday at the Jerusalem District Court against 39-year-old Seif Al-Din Abdel-Nabi on charges of contacting a foreign agent and illegal funding of terrorism.

According to the indictment, Abdel-Nabi had known Hamas operative Zakariah Najib for years before giving Najib the money. Najib has served time in Israeli prison for involvement in the abduction and murder of IDF soldier Nachshon Wachsman in 1994. He was released in a prisoner swap in 2011 when abducted Israeli soldier Gilad Shalit was released in exchange for over 1,000 terrorists.

Abdel-Nabi met Najib in Turkey during a business trip to a clothing shop he owns in Istanbul, the indictment elaborated. Najib knew that the defendant lived in Jerusalem and asked him to send the money to Israel, where he would be ordered to transfer the funds to families of terrorists who were either killed or serving time in prison. The money transfer was meant to be a remuneration by Hamas for the terror attacks.

During several trips to Turkey, the defendant allegedly received a total of USD 25,000 from Najib. He used various techniques to hide the money when traveling to Israel, such as having attempted to disguise the money transfers by using different mobile phones and coordinating them in public places.

“By committing the above actions, the defendant knowingly maintained contact with a foreign agent without sufficient explanation in order to promote or fund acts of terrorism or to provide a reward for terror attacks,” read a statement by the Jerusalem District Attorney’s Office, which has requested that Abdel-Nabi remain in custody until the end of court proceedings against him.

The Jerusalem Police on Sunday morning also arrested six residents of the Arab neighborhood of Jabel Mukaber who are suspected of joining and supporting a terror organization.

The evidence was obtained through the interrogation of Soufian Abdou, who was arrested on Friday for supporting a terror group just several days after completing a 14-year prison term for attempting to poison Israelis at a coffee shop in Jerusalem. Abdou’s remand has been extended until Monday.