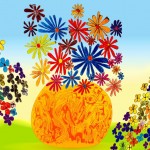 In honor of the World Autism Awareness Day, the artwork of Israeli children with autism is being showcased in a unique exhibition called “Speaking Colors” at the UN Headquarters in New York. The exhibition opening took place on Tuesday with the attendance of UN Secretary General Ban Ki Moon.

The event is taking place just weeks after the United Nations had chosen ALUT, the Israeli Society for Autistic Children, to receive Special Consultative Status at the UN Economic and Social Council.

ALUT is an Israeli NGO established in 1974 by parents of autistic children, which serves the needs of autistic children and their families through a variety of educational, residential, vocational and leisure-time programs. The organization works to advance the rights of people with autism as well as to improve the services available to them and their families. ALUT’s programs include rehabilitation nursery schools, family and occupational centers, residential living homes and summer and holiday camps.
“The Israeli mission at the UN advances a variety of social issues, which concern the international community as a whole,” said the Israeli ambassador to the UN, Ron Prosor.

“We are proud to advance year after year, international awareness on the issues of disabilities and specifically autism.”

“ALUT is doing outstanding work in the UN and we are proud of this blessed cooperation which presents to the United Nations a unique aspect of Israel,” added Ambassador Prosor.

The Committee on Non-Governmental Organizations in the UN that recommended ALUT to receive the Special Consultative Status is comprised of 19 member countries including Turkey, Russia, China, India, Belgium, Israel, Morocco, and the United States. The member countries recommended the acceptance of ALUT without any objections.

The Special Consultative Status at the UN enables organizations to strengthen their impact on the international community by having access to UN committees. Organizations with the status have the chance to spread their message to UN Member States and receive permanent and independent representation at UN debates.

ALUT’S Director General, Einat Cassuto-Shefi, stated that “it is very important that the treatment of autism is on the table at the United Nations. It is a great honor to be chosen as a UN advisory organization on an issue that worries millions of families around the world.”

In 2007, the United Nations declared April 2 to be World Autism Day to devote a day of awareness of autism, a disorder of neural development characterized by impaired social interaction and communication skills as well as restrictive and repetitive behavior.