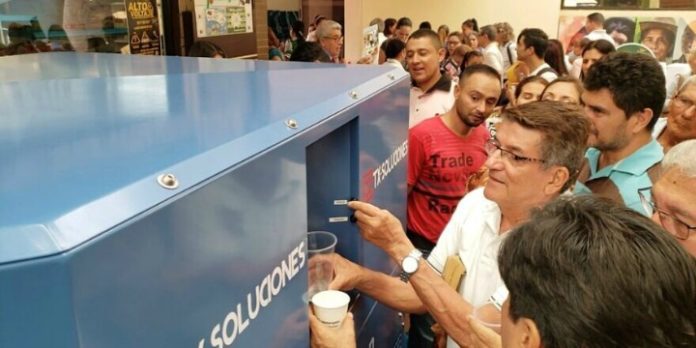 At a ceremony last week with President Alejandro Giammattei, Guatemala was presented with the Israeli GEN-M water generator, which creates water out of air.

The device can produce 800 liters of water a day and was donated by its creator, Israeli company Watergen. It is transportable and clean, and requires only an energy source to operate.

Such technology is not only important to storm recovery, but also to Guatemala’s strained water infrastructure. Some 20% of Guatemalans have difficulty accessing safe drinking water.

Guatemalan Presidential Commissioner for Foreign Investment and Tourism Isaac Farchi said, “After a successful working visit to the State of Israel with President-elect Alejandro Giammattei, we are all witnesses today to the fruits of the brotherhood between Guatemala and Israel.”

“We are very grateful to Watergen, which donated this machine during these difficult times facing Guatemala,” he added. “It is a clear sign that Israeli technology provides the most vital of needs and helps the Jewish state’s many friends.”

“Thanks to Watergen, we hope soon to keep building on the good relationship that our president’s visit to Israel has generated,” Farchi concluded.

Guatemalan Economy Minister Antonio Malouf said, “With this donation by Watergen, we will make use of innovative solutions to the major challenges we are dealing with. Furthermore, this technology contributes to the growth of a more dynamic and resilient economy.”

Dr. Michael Mirilashvili, president of Watergen, stated, “There is indeed a huge need around the world, particularly in Latin America, for the clean drinking water that is produced by our AWGs.”

The GEN-M, he asserted, had “the capacity to provide everyone in the world with freshwater without damaging the planet and the environment.”