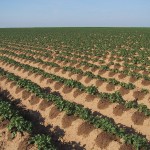 Fifty years ago, Naty Barak was just one of several farmers in Kibbutz Hatzerim located in the Negev desert of Israel. Infamous for its merciless heat and arid land, the Negev was in need of solutions to problems facing much of the world.

Israel’s first prime minster of Israel, David Ben-Gurion, had been one of the staunchest proponents of settling and developing the Negev. “The ultimate test of Israel in our generation…” he claimed, was the “takeover by force of science and pioneering, the wilderness land spaces of the south and the Negev.”

But if such a dream stood any chance of success, the dry conditions of the Negev had to be remedied.

Thus, Naty Barak and his small group of farmers began their quest to fulfill Ben-Gurion’s dream when they founded Netafim in 1965.

Barak, the current chief of sustainability officer, explained to Tazpit the challenging environment of the Negev: “We were struggling with the same challenges some of the world faces today. But being in the Israeli Negev desert, we faced water scarcity and the land was very poor.”

After a series of initial trials, experiments and 50 years of dedication, Netafim is now a leading global supplier of drip irrigation (DI) technology.

The company is comprised of 16 manufacturing plants and 27 subsidiaries operating across dozens of countries including India, the US, Brazil, Chile, Peru, Mexico, South Africa and Australia.

The innovative methods of utilizing water to its maximum capacity has enabled such countries to significantly increase their yields using half the amount of water.

Barak told Tazpit that drip irrigation “gives an answer to the most pressing challenges today including water scarcity, arable land, food security, energy, soil degradation etc. More importantly it has an excellent impact on social issues, capacity building among small farmers, women empowerment and so on.”

When asked whether his technology has ever been rejected on political grounds, Barak explained: “There are still some countries in which we are not active for political reasons.”. However he still views his project as a bridge for peace. “In general we leave politics aside and we use the platform for drip irrigation working farmer to farmer. We don’t talk politics. We talk farming.”

He further expressed his desire to expand further into Egypt and Jordan where he believes that with the food and economic challenges, Netafim “could perform miracles. We could do so much more for them.”

Alluding to the new Jewish Year, Barak offered his own words of inspiration.

“I think that this nice Jewish term describes what we do and I would like to see more of that. I am sitting in my office and we are very fortunate that our business is actually doing well by doing good.”