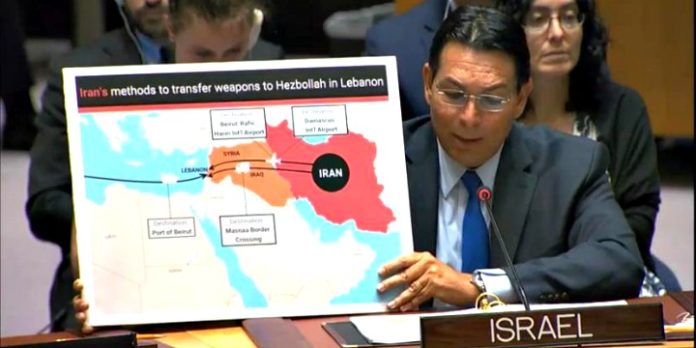 Israel’s Ambassador to the United Nations on Tuesday shared Israeli intelligence information with the UN Security Council showing Iran funneling weapons to the Hezbollah terrorist organization, highlighting the continuing threat posed by the Tehran regime and its Lebanese proxy along Israel’s northern border.

“In the years 2018-2019, Israel found that dual-use items are smuggled into Lebanon to advance Hezbollah’s rocket and missile capabilities,” Danny Danon — Israel’s envoy to the UN — revealed to the Security Council.

Danon said that the Quds Force of the Islamic Revolutionary Guards Corps (IRGC), which directs Iranian interventions abroad, had begun “to advance the exploitation of the civilian maritime channels, and specifically the Port of Beirut.”

Said Danon: “The Port of Beirut has become the Port of Hezbollah.”

Danon disclosed that Iran and Hezbollah were aided by Syrian agents who purchased the dual-use equipment — meaning it can be used for both civilian and military purposes — from foreign civilian companies and transferred it to Lebanon. These agents misled the companies when they officially unloaded the equipment at the Port of Beirut, Danon said, which was then transported to Hezbollah’s missile production facilities.

Danon said that Hezbollah regularly uses civilian centers in Lebanon to illegally transport arms, in “flagrant violation” of UN Security Council Resolution 1701, which calls for the disarming of the terrorist organization. Danon also presented the Security Council with a map of various weapons transfer routes.

The Israeli envoy urged UN member states to take extra precautions with regard to the sale of dual-use equipment.

“Are you absolutely sure your companies are not the ones selling dual-use equipment to the hands of Hezbollah?” Danon asked. “Are you sure your citizens know the end-users of these dual-use items?”