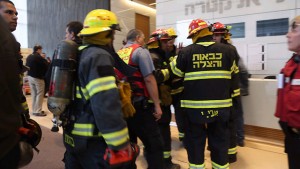 The Israeli Fire Department has reported a sharp increase in violent attacks against its firefighters in Yerushalayim’s Arab neighborhoods over the past two years.

“It’s dangerous, and it’s mostly sad, and a shame,” a source in Jerusalem’s Fire Department said. “We come to rescue civilians, and their neighbors attack us with serious violence,” with barrages of stones, firebombs, and violent physical attacks.