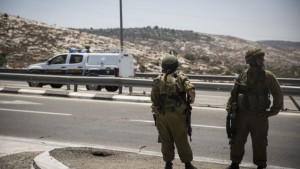 An Israeli policeman was mildly injured in an apparent car-ramming attack Wednesday next to the West Bank settlement of Ofra, north of Yerushalayim, Times of Israel reports.

The driver crashed into the checkpoint after ignoring police warnings to stop. Security forces reportedly opened fire on the vehicle as it approached the barrier.

The driver was not apprehended and managed to flee the scene to the nearby village of Silwad. Security forces were searching the area for the suspect.