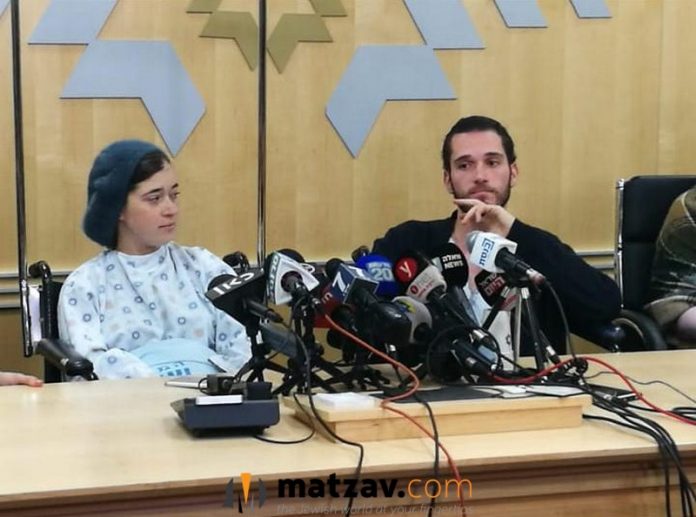 The mother of Amiad Yisrael — the infant boy who died on Wednesday after being delivered by emergency cesarean section following the wounding of his mother in a terror attack last Sunday — has pledged to have “many more babies.”

Shira Ish-Ran was seven months pregnant when she was hit in a drive-by shooting near Ofra in the West Bank.

According to the Hebrew news site Walla, when she saw her dying son for the first time, Ish-Ran said, “I will prove to them, I will show them. I will bring many more babies into the world.” She added, “Am Yisrael Chai,” Hebrew for, “The people of Israel live.”

Ish-Ran was in critical condition when she arrived at a hospital in Jerusalem on Sunday, but she has since stabilized and is expected to recover from her wounds.

Speaking of his daughter’s improved condition, Ish-Ran’s father, Haim Silberstein, said, “It’s a relief. Shira is improving and there is still a long road to recovery, but we are thankful for every step and hope for the best.”

Ish-Ran’s son was buried on Wednesday on the Mount of Olives in an emotional ceremony attended by hundreds of mourners. “It was extremely difficult,” Silberstein said, “especially that Shira and [her husband] Amichai couldn’t take part and stayed in the hospital.”

The child was posthumously named Amiad Yisrael, and according to Silberstein, his parents “were able to say goodbye to Amiad Yisrael, who they will not be able to raise, in the neo-natal ward. We felt a closing of the circle that we were able to bring him to his eternal rest on the Mount of Olives.”

At the baby’s funeral, Silberstein spoke directly to the terrorists responsible, saying, “You will not succeed, you will never succeed. We are stronger than you. We are more righteous than you. We are connected to this place more than you. We will defeat you. Because this is our holy land, people, and Torah.”

“Amichai and Shira,” he continued, “our heart is torn by sorrow over the pain and the loss. But your new son Amiad Yisrael, our gentle grandson, may God avenge his blood, has already done so much in only four days. He unified the people of Israel who were brought together to pray, with embracing and love.”