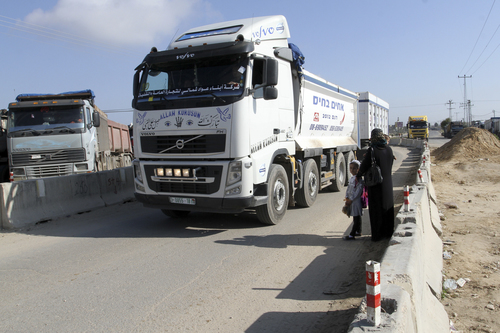 Israeli officials were outraged after learning that an employee of the Christian humanitarian aid organization World Vision was indicted for funneling money and resources to the terrorist organization Hamas.

“Israel has today confirmed what it has known for a long time, which is that Hamas is sustained with funds from ‘human rights organizations,’” said Deputy Foreign Minister Tzipi Hotovely (Likud). “Instead of improving the situation in the Gaza Strip and rehabilitating it, Hamas uses the money intended for children and the needy instead for the benefit of manufacturing rockets and tunnels.”

The southern district of the State Attorney’s Office filed an indictment on Wednesday against Mohammed El-Halabi, World Vision’s senior branch manager in Gaza. El-Halabi was arrested at the Erez crossing on June 15 as he was attempting to return to Gaza.

The indictment against El-Halabi charges him with committing a number of offenses related to direct and indirect support of and involvement in terrorism on behalf of the Hamas terror organization.

El-Halabi, who confessed under questioning to having been an active Hamas member since his youth, said that Hamas chose to dispatch him in 2005 to infiltrate World Vision in light of his prior work for the United Nations Development Program (UNDP) in Gaza. While employed with UNDP, El-Halabi helped collect intelligence for Hamas by stationing “farmers” near the border with Israel who were actually operating as lookouts for the terror organization.

El-Halabi worked his way up the hierarchical ladder in the Gaza branch of World Vision until he eventually became its director, allowing him to have full control over the branch’s budget and aid packages.

The indictment states that after becoming director, El-Halabi helped transfer money and logistical supplies to Hamas through a number of fraudulent schemes, including fictitious humanitarian projects, false registration of Hamas activists as World Vision employees, and the reporting of fraudulent budget figures. Supplies included iron rods, pipes, and building materials, which were used for the construction of Hamas military outposts and terror tunnels.

El-Halabi admitted that the humanitarian aid was received almost exclusively by Hamas terrorists and their families. El-Halabi distributed thousands of food packages and medical supplies to Hamas terrorists every month, including during Operation Protective Edge in 2014.

Additionally, El-Halabi confirmed that the money which was transferred to Hamas was primarily intended to strengthen the terror organization’s military capacity through the purchase of weapons and the financing of the construction of Hamas’s underground terror tunnel network.

Deputy Foreign Minister Hotovely stressed that the activities of human rights organizations operating in Gaza must be monitored.

“It is important to tighten the investigations into contributions to human rights organizations and to be especially concerned that money is used for the purposes for which it was donated,” added Deputy Minister Hotovely.

Foreign Affairs and Defense Committee Chairman MK Avi Dichter expressed the need to be aware of how other international aid organizations are distributing their donations as well.

“Reasonable international bodies operating in Gaza are used as sources of money for the financing of Hamas terrorism in Gaza, and the difference with World Vision is just that the other bodies have not yet been exposed as such,” said Dichter.

“The naivete that characterizes the humanitarian organizations with good intentions is what enables Hamas terrorists to endorse the support for terrorist infrastructure,” the committee chairman added.

World Vision adamantly denied the allegations against El-Halabi in the indictment and claimed that the organization continuously made certain that all its humanitarian aid was not misappropriated.

“Based on the information available to us at this time, we have no reason to believe that the allegations are true,” World Vision said in a statement. “We will carefully review any evidence presented to us and will take appropriate actions based on that evidence.”