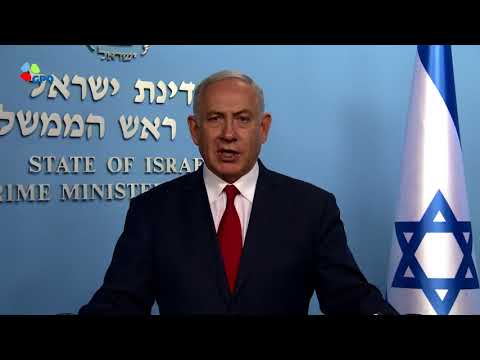 In his first public reference to Israel’s overnight air strikes in Syria, Prime Minister Benjamin Netanyahu said on Thursday that Iran had “crossed a red line” and the IDF “responded accordingly.”

The Israeli military, Netanyahu said in a video message, “conducted a very large-scale attack against Iranian targets in Syria.”

“Thanks to the proper preparation of our forces, both offensively and defensively, the Iranian operation failed,” Netanyahu noted, referring the Fajr-5 missile salvo launched at the Golan Heights by the Quds Force of the Tehran regime’s Islamic Revolutionary Guard Corps.

“We are in a long battle, and our policy is clear: We won’t let Iran establish itself militarily in Syria,” Netanyahu declared.

“Yesterday, I conveyed a clear message to the Assad regime: Our action is directed against Iranian targets in Syria,” Netanyahu added. “But if the Syrian army acts against us, we will act against it. This is exactly what happened yesterday. Syrian [aerial defense] batteries fired surface-to-air missiles against us, so we hit them.”

“The international community needs to prevent the establishment of the Iranian Quds Force in Syria,” Netanyahu stated. “We must unite to cut off the arms of this expanding evil, there and everywhere.”

“I repeat: Whoever harms us — we will harm them many times over, and whoever prepares to harm us — we will act to harm them first. That’s what we did, and we will continue to do so,” the prime minister concluded.