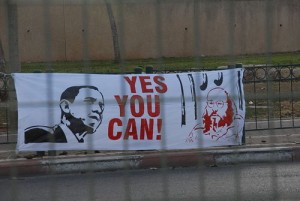 Israeli politicians warmly welcomed the news that Jonathan Pollard, imprisoned in the U.S. for nearly 30 years, is due to be freed on parole in November.

“Throughout his time in prison, I consistently raised the issue of his release in my meetings and conversations with the leadership of successive U.S. administrations. We are looking forward to his release,” Prime Minister Benjamin Netanyahu said.

“A great joy,” Justice Minister Ayelet Shaked (Jewish Home) wrote on her Facebook page. “This evening we were informed that very soon we will have the privilege of rejoicing over Jonathan Pollard’s release from American prison. Thirty years of suffering will come to an end in November. Not because of mercy, but because of the law. Not because of the U.S.’s destructive deal with Iran, but because the sentence has been served.”

The current head of the Jonathan Pollard lobby in the Knesset, MK Nachman Shai (Zionist Union), said, “For 30 years, I’ve followed this sad, ugly scandal. Finally it’s coming to an end. For the past two years, we have led a massive campaign for his release. I hope to see him get off the plane at Ben-Gurion International Airport safe and sound. I’ll be waiting for him there.”

MK Michael Oren (Kulanu), the former Israeli ambassador to the U.S., said, “The announcement by the American parole board marks a significant milestone in the historic alliance between Israel and the U.S. After 30 years, Pollard’s release will end a painful and complicated scandal that tore a rent between the two nations and cast a shadow over the American Jewish community, which was concerned about claims that it had double loyalties.”

Yesh Atid party leader MK Yair Lapid said, “This is a decision that does justice too late. It would be better if Pollard, after years of suffering in an American prison, had been freed earlier. Today we welcome the decision. The entire Jewish people are waiting to see him at home.”