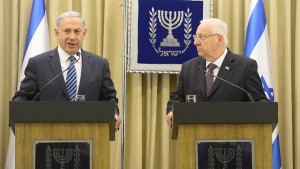 Israeli Prime Minister Bibi Netanyahu and President Reuven Rivlin have not held work meetings in almost two months, as relations between the two remain rocky and strained in the wake of the president’s criticism of the prime minister’s rift with the American administration.

Since Rivlin was elected to the role of president a year ago, he and Netanyahu met at least once a month. During Shimon Peres’ tenure as president, he met with the prime minister every two weeks, usually for dinner attended also by the prime minister’s wife.

However, Rivlin’s last meeting with Netanyahu was held on July 17.

“I meet with the prime minister regularly once a month, but over the past two months we did not get to meet,” Rivlin told Army Radio on Wednesday morning.

When asked why they have not met, the president answered: “Why? Because we didn’t schedule a meeting. I think we exhausted our differences on everything to do – not about the Iranian issue – but about Israel’s ties with the international community. We exhausted that issue, and until things are removed from the agenda, we probably don’t need to meet because each of us is busy with the same issues.”

Rivlin and Netanyahu are in a strong disagreement on the Israeli government’s conduct towards the American administration. Rivlin is worried of the damage Netanyahu is causing to Israel’s relationship with the United States. Among other things, the president criticized Netanyahu’s decision to address Congress without coordinating it with the White House.

In private conversations, he also expressed concern of the fact Netanyahu refuses to discuss with the Americans the compensation package to Israel in the wake of the nuclear agreement with Iran.

It is no secret there is no love lost between President Rivlin and Prime Minister Netanyahu. The prime minister publicly worked to thwart Rivlin’s election, and the president was deeply offended. However, after Rivlin was elected, the two made amends and were able to maintain a courteous relationship.

In a past interview, Rivlin was asked if he meets with Netanyahu for dinner as Peres had done. The president humorously responded with: “I eat with my friends.”

But while the prime minister and president haven’t met, the channels of communication between their offices remain open as usual. The President’s Residence maintains normal ties with the head of the National Security Council, the Military Secretary to the Prime Minister and the Cabinet Secretary. Day to day operations continue undisturbed as well – including the hosting of dignitaries and state events.