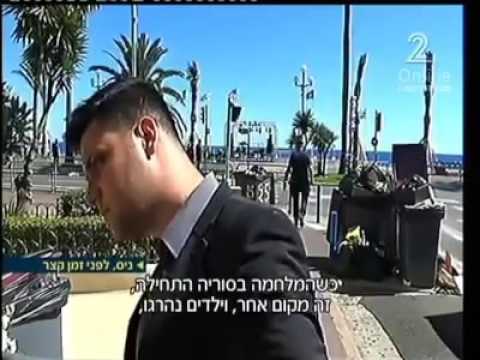 An Israeli reporter at the scene of Thursday night’s terrorist attack in Nice was warned by a resident of the city not to let anyone recognize his country of origin, cautioning him against speaking Hebrew.

Approached by Channel 2’s Elad Simchayoff – conducting man-in-the-street interviews along the Promenade des Anglais in the aftermath of the Bastille Day massacre where it took place – a woman who refused to show her face on camera said, “You have to be very careful.”

“Because you are Israeli,” she replied. “It’s very dangerous.”

The woman, who said she could not appear in the broadcast, because she had moved her business to Nice, explained to Simchayoff – who wanted to know what she meant by “dangerous” – that Israel is subjected to double standards in Europe.

“When it was the war in Gaza, for example, you had manifestations [i.e. demonstrations] of thousands and thousands of Arabs on the street… [But] when the war in Syria began, as well, and children were killed, [no Arabs demonstrated] on the street. Never.”

The woman also said that it was especially perilous for an Israeli to be recognized as such in the area, due to media coverage of the truck-ramming, which left at least 84 dead and 200 wounded. She claimed that, since the terrorist attack, analysts have been saying, “Look at how the Israelis protect themselves, [while] we [are unable to do so.]” And “each Arab” watches TV.

In addition, she said, “There is an atmosphere in Brussels [the capital of the European Union] that you [Israelis] are the worst. This is the problem… So be very careful; don’t talk to anybody.”

The truck attack was carried out by 31-year-old Mohamed Lahouaiej Bouhlel, a 10-year French resident from Tunisia with a criminal and domestic-violence record, but no radical Islamist history. Nevertheless, ISIS claimed responsibility for his attack, in which Bouhlel plowed a 19-ton rental truck through crowds engaged in Bastille Day celebrations at the seaside resort town. French police have detained seven people for interrogation, including Bouhlel’s ex-wife.