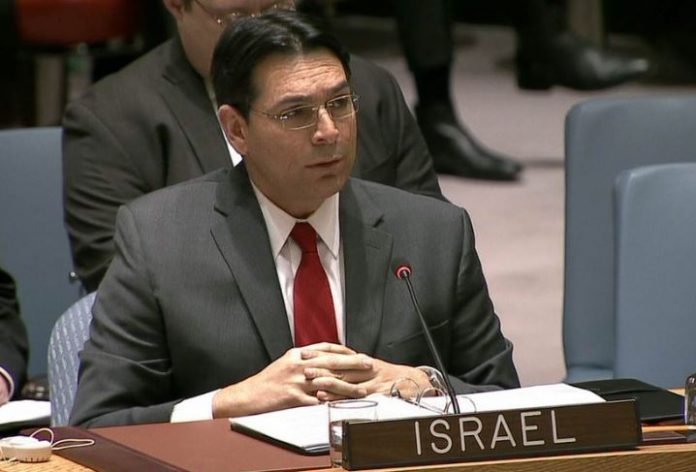 Israel’s UN envoy has called on the Security Council to punish the Tehran regime following the ballistic missile test carried out this past weekend by the Islamic Republic.

“Iran has once again defied Security Council resolutions and revealed its true intentions,” Ambassador Danny Danon said in a statement. “The international community must not bury its head in the sand in the face of this Iranian aggression. The Security Council members must act immediately in response to these Iranian actions which endanger not only Israel, but the entire Middle East.”

At a press briefing on Monday, White House Press Secretary Sean Spicer was asked about the test.

According to a Fox News report, Iran on Sunday conducted a “failed test of a reentry vehicle.” A Khorramshahr medium-range ballistic missile, the report said, was fired from a test site about 140 miles east of Tehran and exploded after flying 600 miles.

This, the report noted, marked a violation of UN Security Council Resolution 2231, which was passed in July 2015 shortly after Iran and six world powers reached a landmark nuclear agreement. The resolution called on Iran “not to undertake any activity related to ballistic missiles designed to be capable of delivering nuclear weapons, including launches using such ballistic missile technology.”

Meanwhile, the regime-aligned Tasnim news agency quoted a top-ranking Islamic Revolutionary Guard Corps commander as saying on Sunday that Iran was “among a handful of countries that have gained the knowhow” to build ballistic missiles that can hit moving targets.

“Our enemies have stood against us with complex and special tactics and techniques,” Brigadier General Hossein Salami said. “In order to confront them, we need to take the initiative and employ special methods, techniques and tactics.”