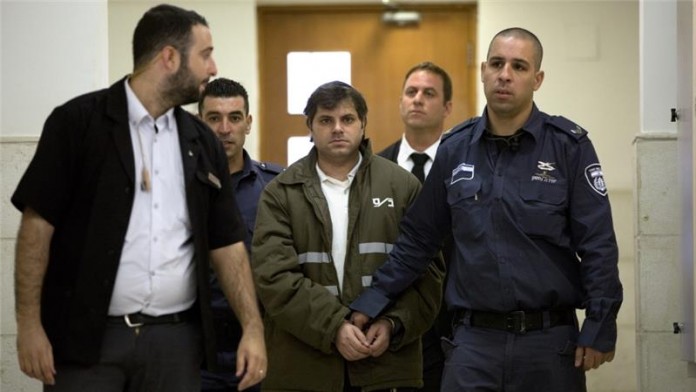 The ringleader who kidnapped and burned alive a Palestinian teenager two years ago – a revenge killing that shocked many here because of its savagery – was sentenced Tuesday to life in prison plus 20 years.

Yosef Chaim Ben-David was convicted of murder and kidnapping last month. Ben-David, 32, the owner of an eyewear shop in Jerusalem, lived in a Jewish settlement in the West Bank, is married with a young daughter and is the son an ultra-Orthodox rabbi.

The killing of Mohammed Abu Khdeir, 16, in 2014 was part of a summer of violence that contributed to the war between Israel and the Islamist militant movement Hamas in the Gaza Strip.

Before his sentence was read in court Tuesday evening, Ben-David made a brief statement. “I apologize for what happened,” he said. “I ask forgiveness of the family for all that happened.”

Ben-David said he had served as a volunteer for one of the emergency response teams that assist ambulance crews at the scenes of accidents and attacks. “I attended to both Jewish and Arab bodies,” he said. “I always considered the human form and respect for the dead to be holy.”

Members of the Abu Khdeir family shouted at Ben-David in the courtroom, calling him a “piece of garbage” and “no better than a Nazi.”

Prosecutors said that Ben-David persuaded two minors to join him on a “hunting expedition” to kill a Palestinian to avenge the murder of three Israeli yeshiva students, who had been kidnapped and shot by a Hamas cell operating in the West Bank.

The trio trolled the streets of East Jerusalem with a pair of plastic handcuffs and a can of gasoline before they found their victim.

His young accomplices were earlier convicted of murder. The minors are unnamed because of their ages. One received a life sentence, the other 21 years.

Ben-David’s attorneys had sought unsuccessfully to have his sentencing delayed by a last-minute insanity defense, arguing that he was not responsible for his acts at the time.

In an initial court appearance, Ben-David had shouted, “I am the messiah!” Relatives of the victim said at the time it was an act. The judges rejected his claims of diminished capacity.

After the sentence of life in prison was read, members of the Abu Khdeir family said the punishment was too lenient.

“He should be sentenced to 20 lifetimes in prison,” Hussein Abu Khdeir, the victim’s father, told The Washington Post. “He should never be released.”

The father said Ben-David should never be eligible for parole. “His punishment should be great enough to deter anyone else from going out and burning a child to death.”

Attorneys for the family also are demanding that Ben-David’s family home be demolished as part of his punishment, just as the homes of Palestinian attackers are often leveled by Israeli forces.

Attorneys for Ben-David said they would appeal the verdict and seek to have a higher court reconsider their client’s insanity plea.

Outside the courtroom, the violence continued. A Palestinian rammed his car into a group of Israeli soldiers Tuesday, injuring one seriously on a road outside Ramallah. The driver was shot dead at the scene. On Monday, a Palestinian teenager stabbed and injured an elderly Israeli in Jerusalem’s Old City. The assailant was arrested.