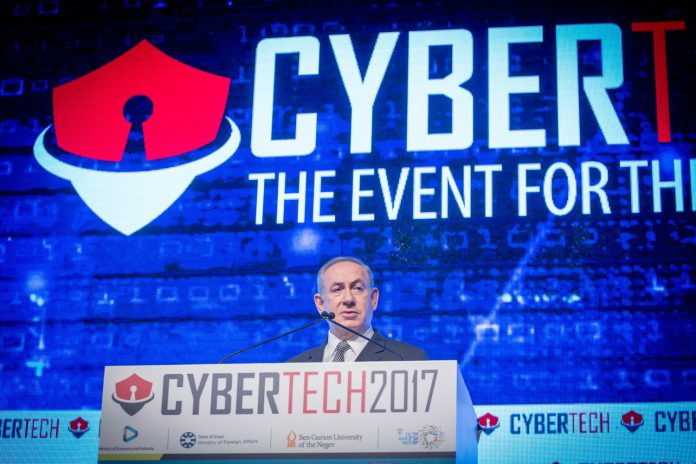 Israeli Prime Minister Bibi Netanyahu, during a keynote address Jan. 31 at Cybertech 2017, the world’s second-largest cybertechnology exhibition, said it is “no coincidence that you are here in Israel” and “not an accident” that the Jewish state is a world leader in cybersecurity.

“This conference has more than 10,000 visitors from five continents. The physical size of Israel has not restricted its power in cybertechnology. Israel draws about one-fifth of the global investment in cybertechnology. This is a coefficient of 200 relative to the size of the population,” Netanyahu said on the second day of the three-day conference, which was hosted at the Israel Convention Center in Tel Aviv.

Cybertech, which was being held in Israel for the fourth time, brought together hundreds of leading investors, entrepreneurs and cyber-focused companies as well as thousands of visitors from around the world.

Aside from speaking proudly about Israel’s contribution to global cybersecurity, the prime minister covered policy issues in his address. Netanyahu argued that the cybertechnology field does not need additional regulation.

“The temptation of more regulation is substantial, but once you impose regulation, you hinder the development of the cybertechnology industry,” he said. “Help where you can to encourage development. We are currently offering tax benefits to entrepreneurs. We also have support programs for companies that come to Israel to establish development centers here. Additionally, we are developing the human capital of Israel through training programs in the military and in academia. I encourage everyone present to invest in Israel.”

Speaking of the threat of cyberterrorism, Netanyahu said that terrorist organizations “use the same tools we use, against us. In recent years, Iran has been developing a terrorist infrastructure in the Middle East. Iran attempts to hack critical infrastructure in the region and in Western countries. The Internet of Things can be hijacked by nefarious actors for dangerous purposes with dangerous results.”

Netanyahu said that such threats may “get a lot worse in the future if we don’t band together,” noting his intent to discuss cybersecurity cooperation with the U.S. during his Feb. 15 visit to the White House. Ahead of his trip to Washington, D.C., Netanyahu met in Jerusalem with former New York City Mayor Rudy Giuliani, an unofficial adviser on cybersecurity for President Donald Trump.

“[Giuliani and I] discussed some of these aspects, but again, I think that Israel and the United States that are two leading powers, the United States obviously the leading power in the battle for cybersecurity. Israel, I would say, is right up there. I think it’s critical that we augment whatever each of us is doing alone by our cooperation both on the government-to-government level and what we can do with our cybersecurity industries,” said Netanyahu.

“It’s not possible, as yet, to have a very broad cooperation for cybersecurity between many governments, but it’s important to have cooperation between some governments, and especially like-minded governments,” he added. “I think we need to expand this and recognize that there’s a core interest of the civilized countries and the democratic countries to protect themselves and their citizens against cyberattacks. The more we work together, the stronger and safer we’ll become.”

The prime minister encouraged investment in Israel and cooperation with Israeli companies.

“I think we’re truly on the cutting edge of this new technology and we’ve had many successes in ensuring our security,” he said. “It’s not an accident, as one would say. It’s not an accident that in the froth and gushing of this entire Middle East and beyond, Israel is a secure and safe environment. We have invested in our security in creative ways, successful ways…We stand, all of us, at the nexus of big data, connectivity and artificial intelligence. Great opportunities, but also great challenges. And Israel, we’re exploiting these opportunities and we’re meeting these challenges. I invite you to do both with us.”

Dr. Eviatar Matania, the head of Israel’s National Cyber Directorate, spoke of the growing scope of cyberthreats worldwide. Israel, he said, has been one of the first countries to prepare for cybersecurity challenges using three primary processes: providing education and information on all cyber-related issues to businesses and industry leaders; establishing the Israeli National Cyber Authority; and pursuing the development of cybertechnology throughout the country, including in academic and educational institutions.

“In all of these fields, Israel is an established world leader in education, information and the development of cybersecurity technologies,” Matania said.

Michigan Governor Rick Snyder told conference attendees that “in Michigan, we also have a national service cyber unit, much like the IDF (Israel Defense Forces). We established the Michigan Cyber Civilian Corps, gathering talented individuals who can respond if anything occurs, which I am very excited about, because I believe it is the forefront of the future.” JNS.ORG